Why is it called Soft-plumaged Petrel?

I've just finished painting another petrel plate - for what is provisionally called 'The Tubenose Handbook'* authors Hadoram Shirihai and Vincent Bretagnolle. This gives me an excuse to write about something a little more exotic than what's currently showing around Topsham - in fact not a great deal it being June. Here's part of the finished plate, mostly Soft-plumaged Petrel in it's various guises, before any corrections of which, knowing Hadoram, there will be quite a few. 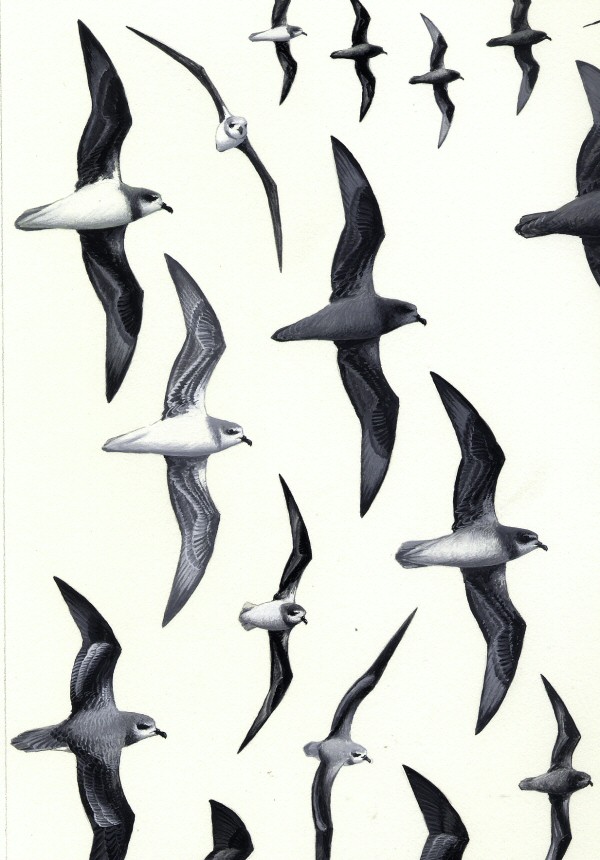 Soft-plumaged Petrel always struck me as one of the oddest of bird names. It's not exactly a useful field character - 'Pterodroma close going right! it looks really soft!' Mind you, given that many Pterodromas do look pretty similar, I can understand why things might have got a bit desperate when the names were given out.

So where does the name come from? John Gould described the species in 1844 and gave it the name Procellaria mollis - mollis meaning soft in Latin (as in to mollify). He was impressed by 'the peculiar character of the under plumage, which is much more dense and soft than that of most other members of the group' (Gould, 1844). Incidentally, in this article (actually a 'letter' to the editor) Gould described ten new species of tubenose - those were the days! So P.mollis became known in English as the 'Soft-plumaged Fulmar' - it seems a lot of petrels were called 'fulmars' in those days.  Since then it's been moved around somewhat before currently sitting in the genus Pterodroma - anyone remember Œstrelata? It's worth remembering though that birds were, and still mostly are, named from a specimen, so what appears significant 'in the hand' may not be much use 'in the field'. It might not even be visible, I suspect Fregetta storm-petrels were originally assigned to species on the basis of whether the tarsus was reticulated or holothecal - basically scaly or 'booted' - try looking for that in a good photo!.

So is the plumage of mollis particularly soft? Well not really, from handling specimens I can't detect any real difference from other Pterodromas. I wondered if Gould was examining a recently fledged juvenile - retaining some down perhaps - but that's unlikely given Gould's expertise. Also, his description mentions dark brown (not grey) wings - indicating a fairly worn bird. Unfortunately his type specimen is not at Tring so I haven't look at it.

Incidentally, ever wondered how these specimens were 'collected'? Obviously taking birds from breeding burrows would be straightforward - if you were at the breeding grounds. On land the gun was the usual collecting tool but if you shoot a bird at sea it's going to be tricky to retrieve. Here's Robert Murphy (1936) who found Soft-plumaged Petrels 'to be one of the species readily caught on a line baited with loggerhead turtle meat or other attractive lure. After taking the hook the birds would fly high, so that the process of capturing them was like hauling in a kite.' It makes grim reading now but I believe, if anything, it means the specimens we have are even more precious and we should derive as much valuable information from them as we can.

Here's a selection of specimens from Tring, all pale type birds but showing the variation in extent of the breast band. 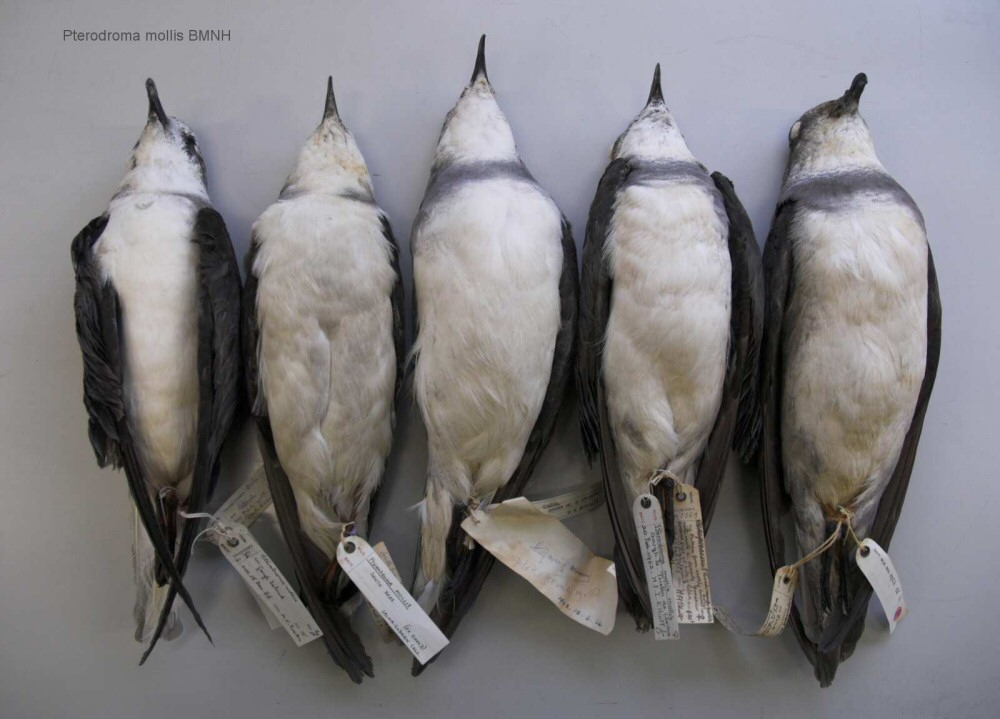 The next photo shows three darker birds, two intermediate types and a fairly uniformly dark bird. Based on the limited number of specimens I've seen I'd guess that there are not just two types or morphs but a gradation in underpart pigmentation. I've also seen photos of birds that appear to be significantly darker than this. 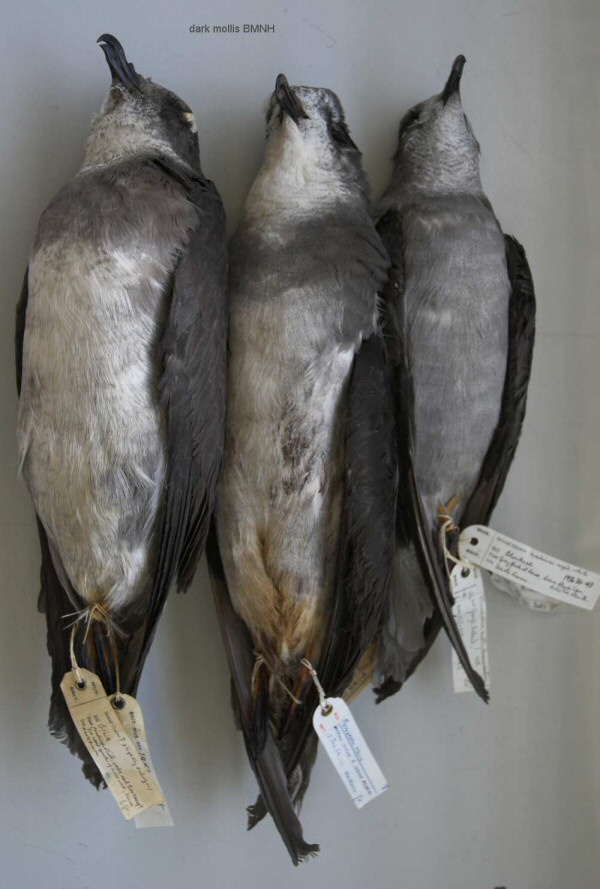 *The full title will probably be: Albatrosses, Petrels and Shearwaters of The World: A Handbook to their Taxonomy, Identification, Ecology and Conservation. A&C Black/Christopher Helm, London.