My excuse is usually that 'the dog needs a walk', or I tell myself that 'someone's got to check the gulls' or that 'I need the exercise and fresh air'. Whichever, it's a privilege and a pleasure to be able to just 'pop down the Rec' to see what's about and to never know what I'm going to see. I usually have the place to myself, which means that anything 'good' is usually mine to find - I suppose it also means that a lot gets missed, but that's how I like it. My nightmare scenario must be to get to my usual gull scanning spot and find someone already there gloating over a Laughing Gull or even 'just' a Caspian Gull (with one record each both equally rare at the site).

So it's only natural, as I head down the road, to sometimes fantasise about what I'm going to find. It's usually nothing unusual but the occasional surprise keeps me going back. Here's today's surprise. 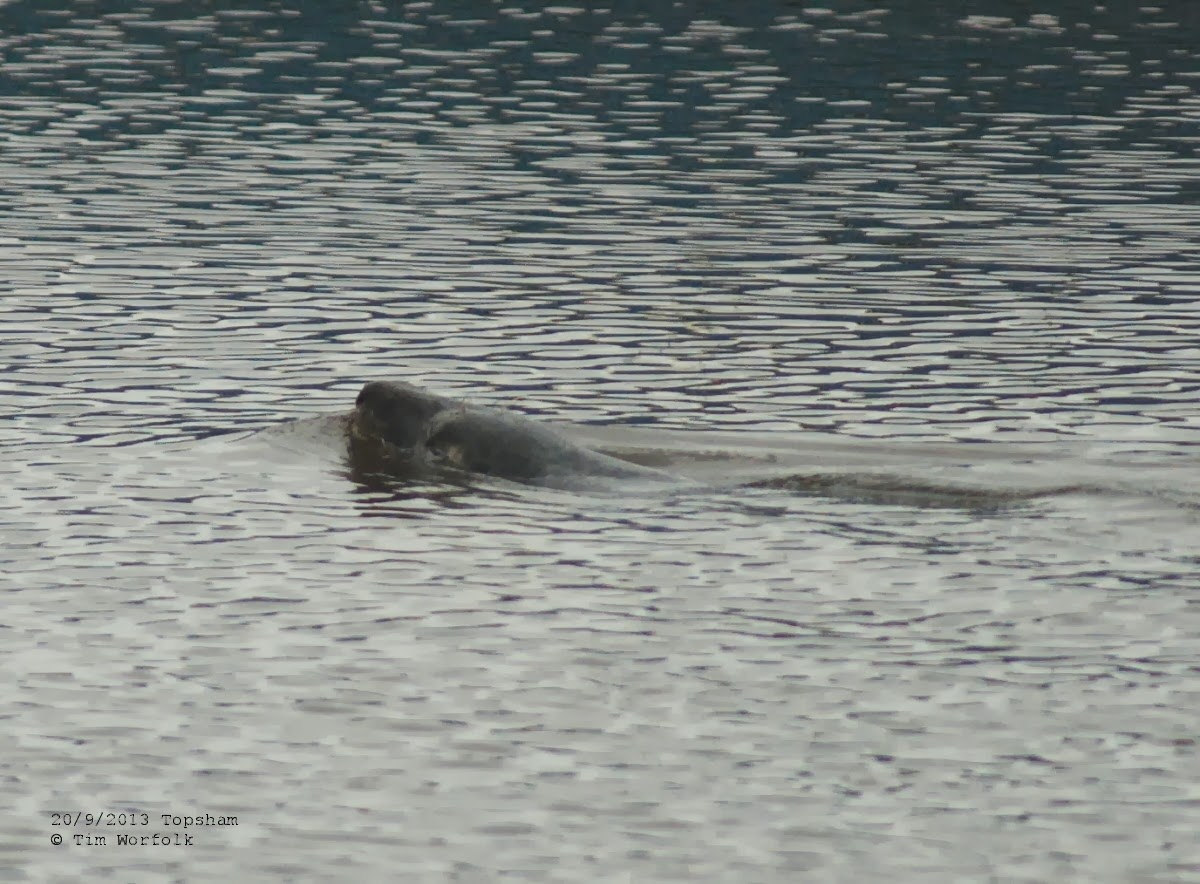 Grey Seal is not particularly unusual maybe, but it's only my third sighting this high up the Exe. I guess it had followed the Mullet up river and was now heading back to sea before getting stranded on the falling tide. I wondered what the dog would make of sharing the river with that but, perhaps fortunately, she wasn't swimming that day.

I checked the large gulls loafing on the spit, where, as usual there was nothing unusual. I had a quick look up the river in case the Lesser Yellowlegs was showing, it wasn't. There were no waders in the vicinity so I turned to my fall-back option and photographed a Cormorant fishing nearby. 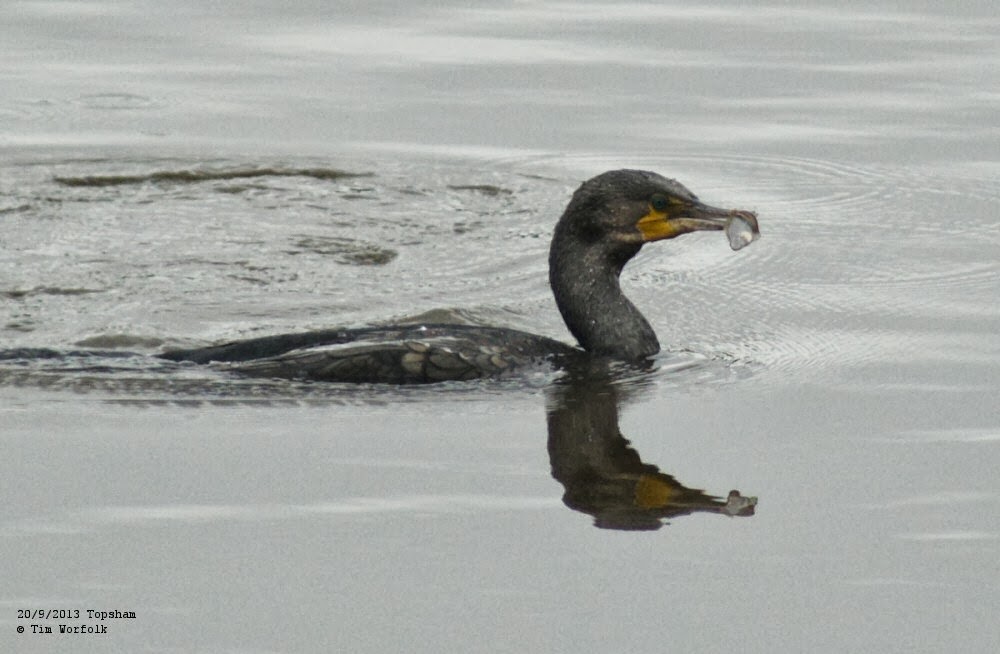 After polishing off a small flatfish - Plaice or Flounder? - it came up with a young Eel. 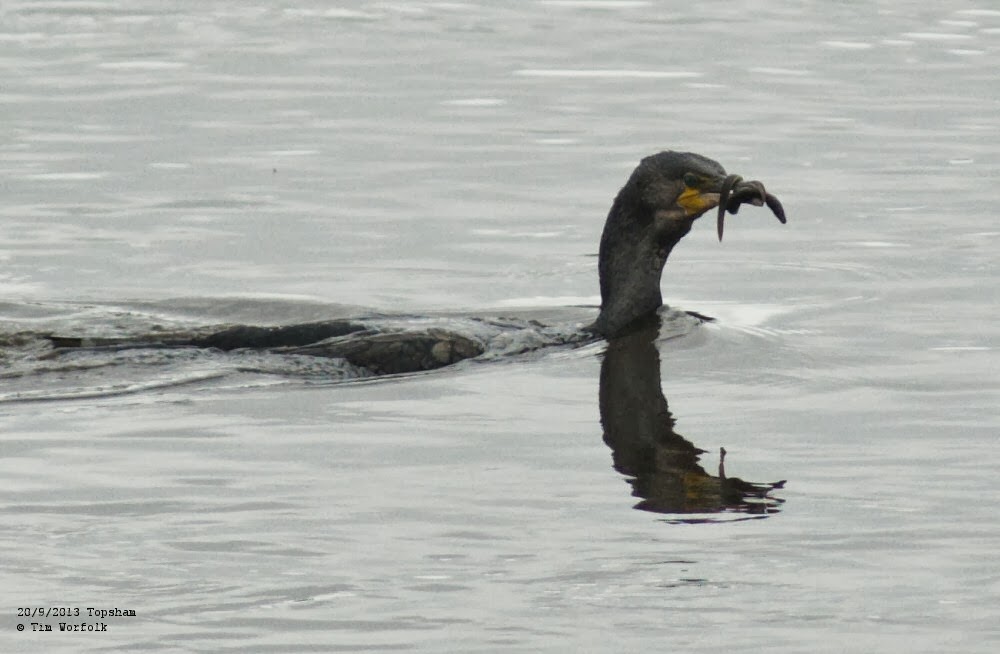 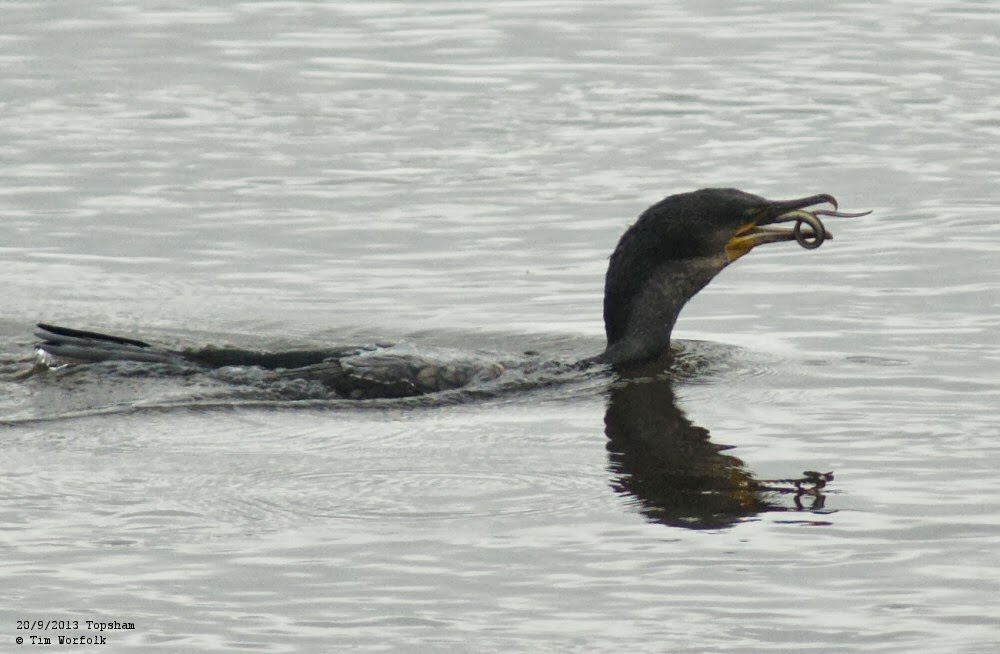 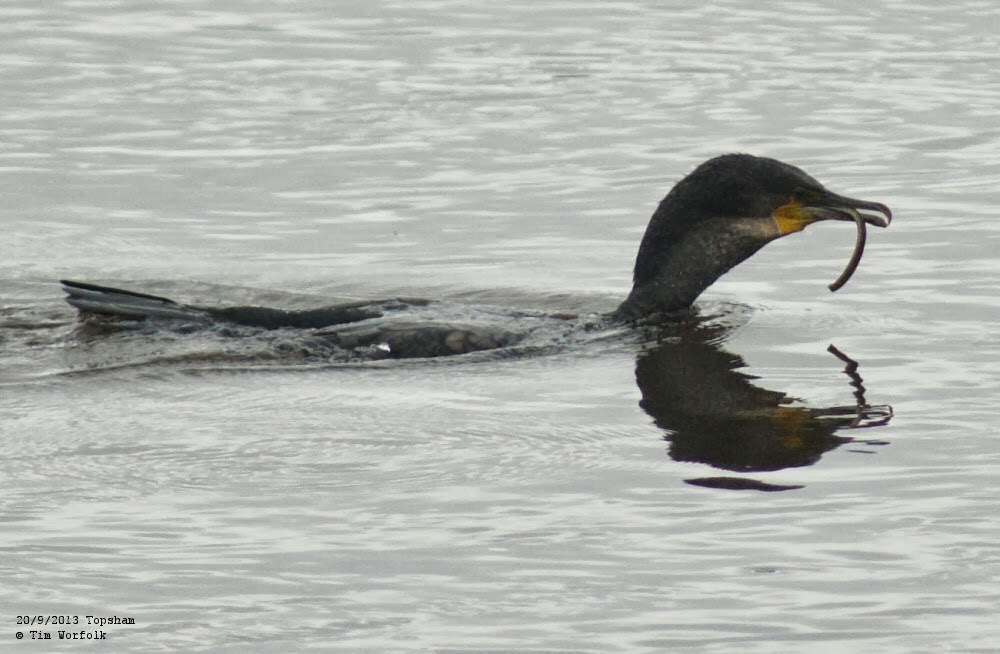 Then, full or just needing to warm up, it swam to shore and rested with wings spread to dry. 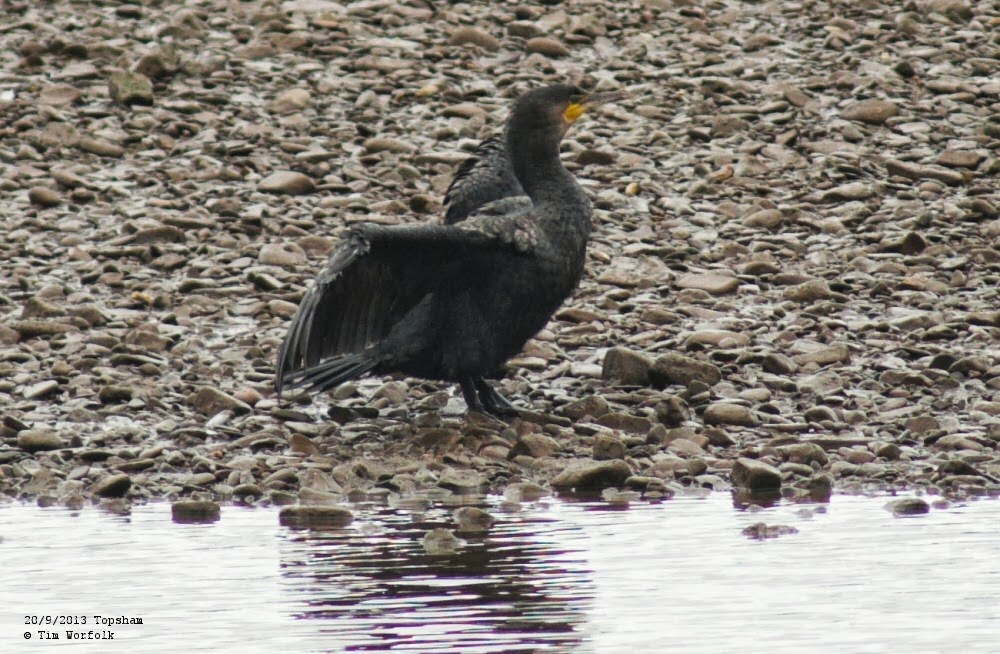 Two more Cormorants were nearby, another 2nd year bird and, behind it, a browner backed, white-bellied juvenile. 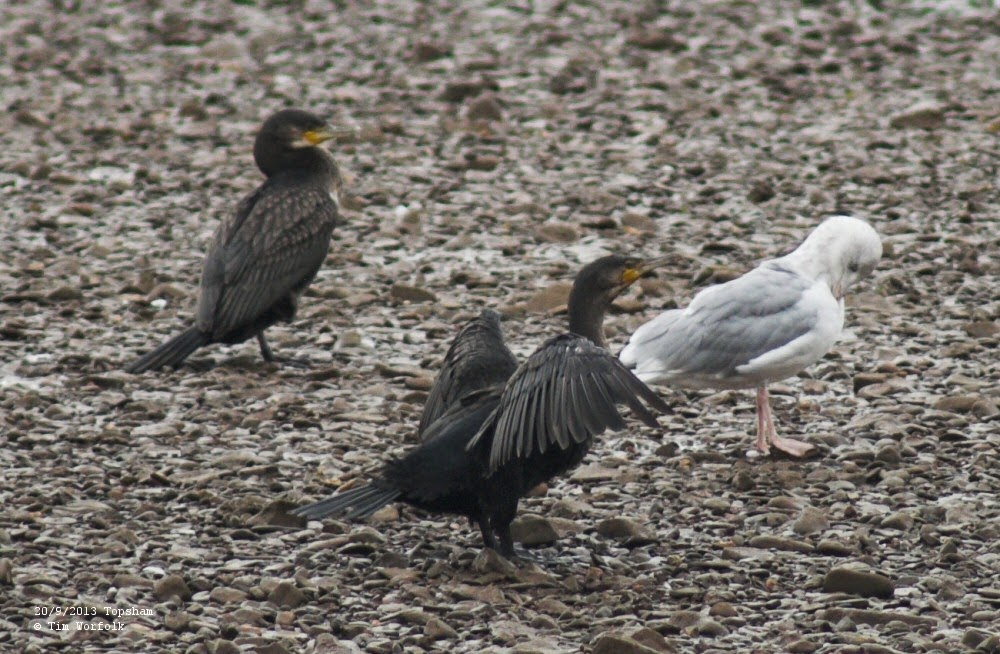 Of course there's more to be done with these birds. The two 2nd years are both sinensis while the juvenile appears to be nominate carbo. Here's a closer look at the first bird showing the almost 90° angle formed by the gape line and the rear edge of the yellow gular skin. On the carbo the angle is much smaller. These two 'Continental Cormorants' have been hanging around this stretch of the Exe for the last week or so yet, oddly enough, have not provoked the slightest interest - if I mention them to visiting birders I just get blank looks, is it me? 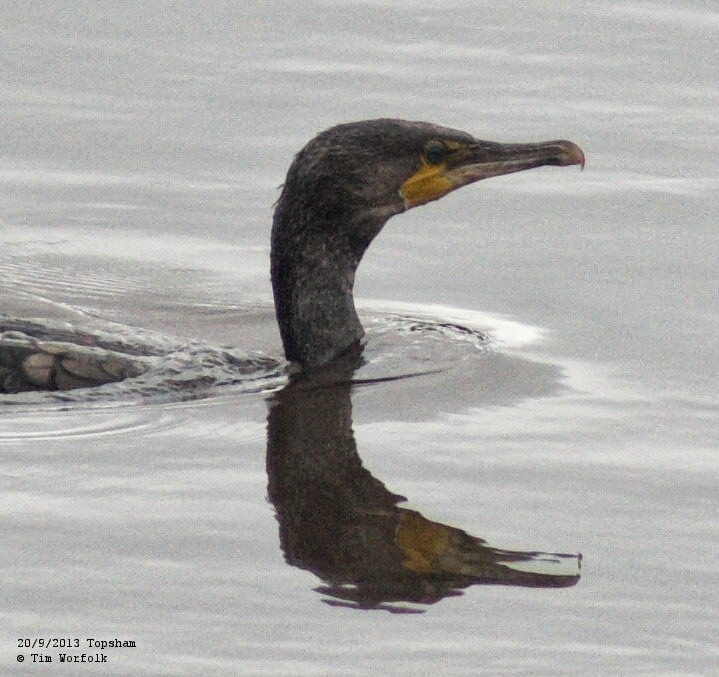 And as if there weren't enough good reasons to pay more attention to Cormorants, just think, one day you might find one of these... 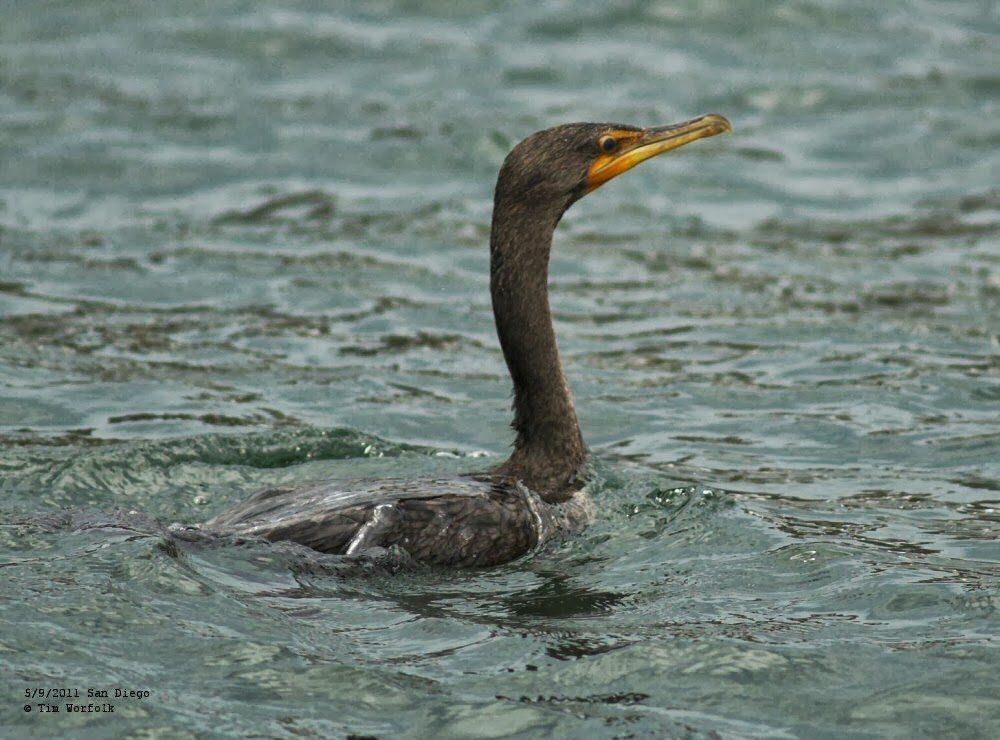