Suspect gulls, odd godwits and Cormorants under the radar.

Pressures of work, concern for my carbon footprint and a determination not to miss anything good on my own patch have predictably resulted in me seeing little of note in the last month. Still, two weeks have gone since my last post so I thought I'd drop these in before my absence is noted.


I've still only seen one definite Yellow-legged Gull so far this Autumn. Nothing has shown up yet at Topsham so I tried again at Exeter Quay. Along with a couple of other suspects - intriguing but ultimately unsatisfying - I found this individual. Here's what I got of it in flight - not a crop, it was really close. 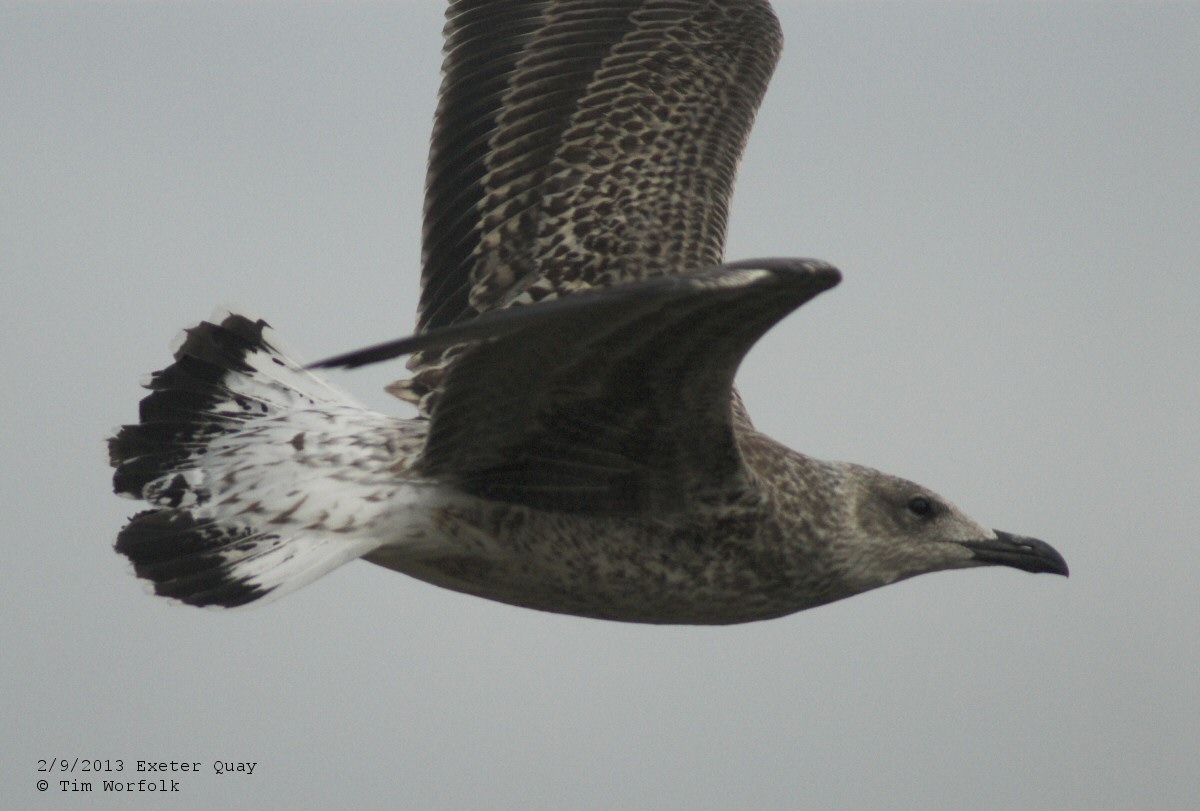 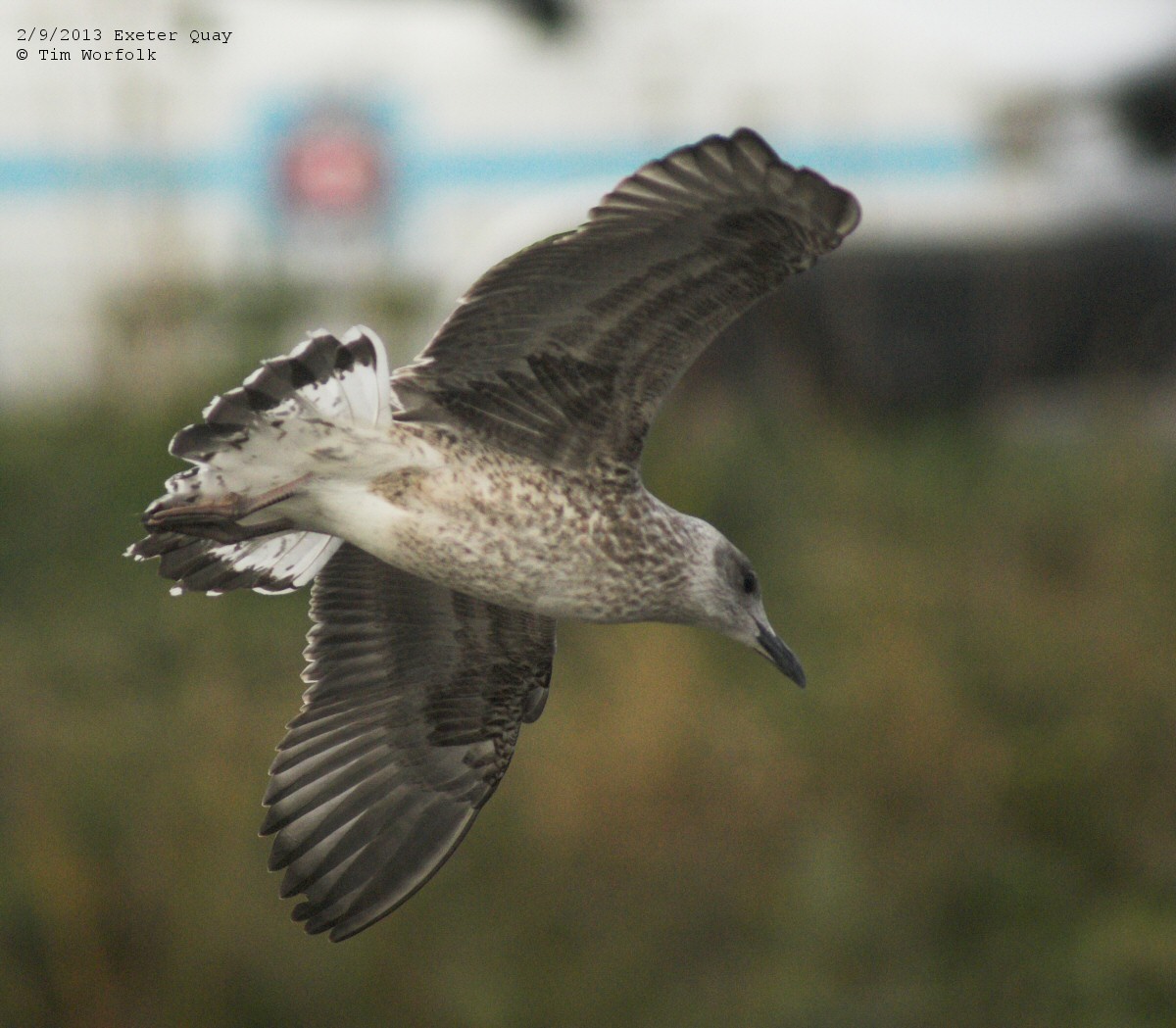 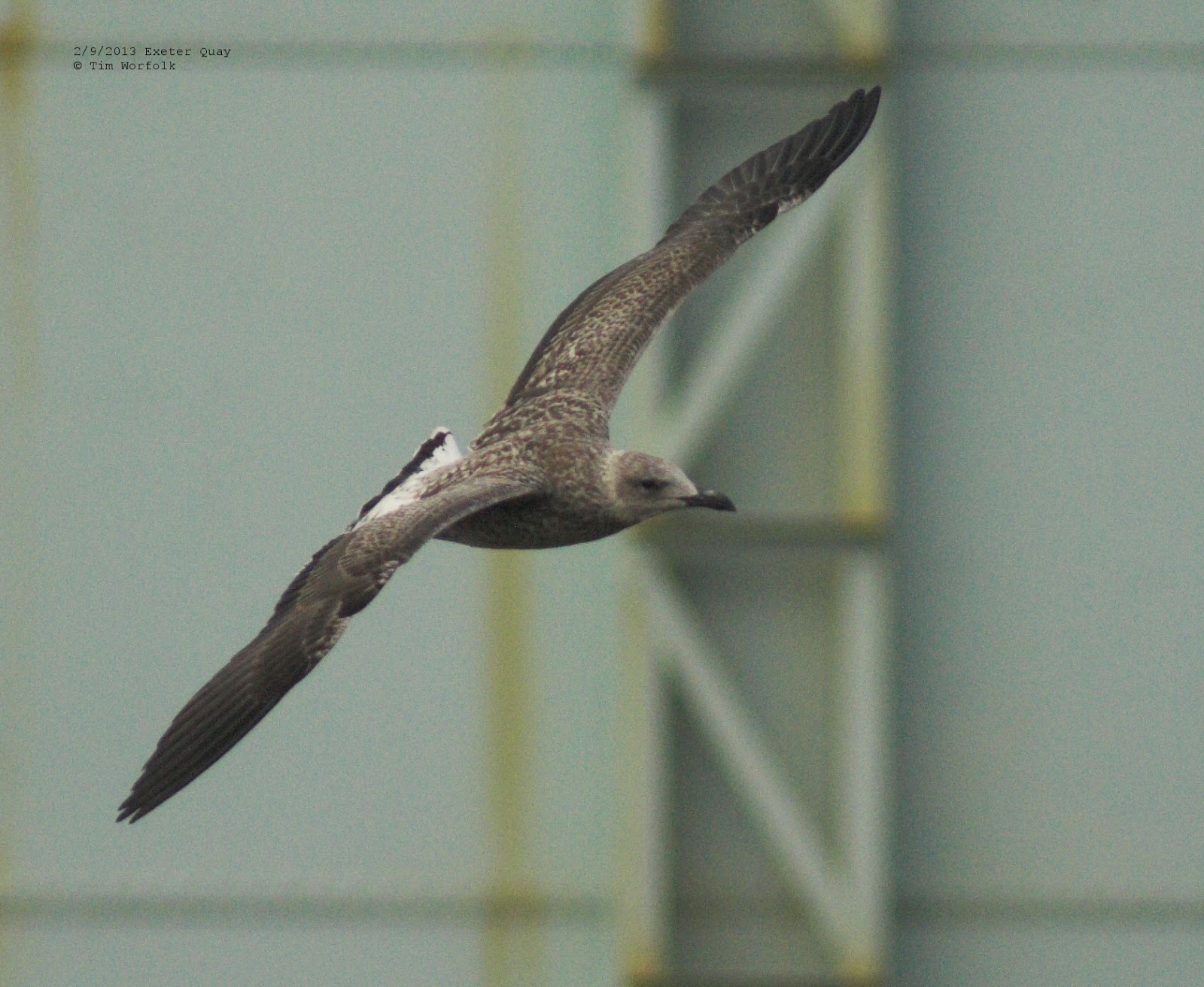 Inexpert as I am, I was initially of the view that this was a michahellis but after Martin Elliott put me right on a few things our (well, actually his) conclusion was that it's most likely to be a graellsii Lesser Black-backed. In favour of Yellow-legged, the best character here is the tail, a fairly narrow, neat black band with a lot of white in the outer retrices. It's moulted a few scapulars and has replaced a couple of greater coverts and tertials on the left wing and a central tail feather (somewhat unusual for a Lesser Black-backed so maybe due to damage?). The main reason why it's probably not a michahellis is the freshness of the plumage - typically by now the coverts should be a lot more worn and there should be many more 2nd generation scapulars. So on balance of probability it's most likely an atypical graellsii; still I can't help complicating things by mentioning the western Iberian lusitanius Yellow-legged Gull, which is typically a month behind michahellis in moult and presumably extremely hard to tell from graellsii?


I don't get many close photo-ops with waders at the Rec so I grabbed a few of these obliging Black-tailed Godwits.
The first is a fairly standard first year bird showing typical juvenile coverts and scapulars with a few new adult winter type feathers on the mantle and possibly, though it's hard to tell, inner wing coverts. 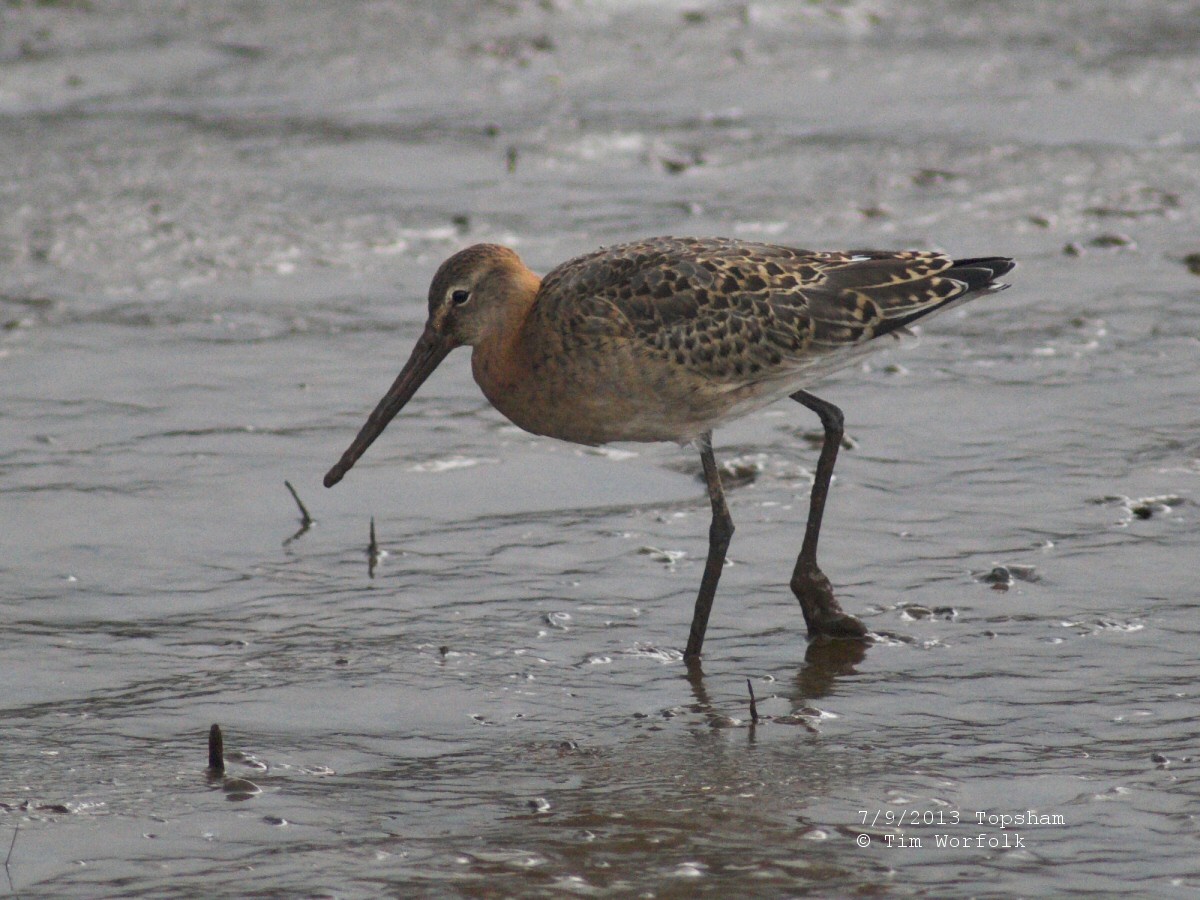 The next one is a striking bird which still puzzles me. The head and body look fine for a juvenile if possibly a little well barred on the breast and flanks. The mantle and coverts show no plain adult winter type feathers, they're all apparently the same generation, again right for a juvenile. But the feather pattern looks very odd for a juvenile, the coverts, tertials and scapulars should look more or less dark with some faint barring and neat gingery fringes - pretty much as in the first bird. The strong barring - particularly along the length of the tertials - looks much more like that of a breeding adult. 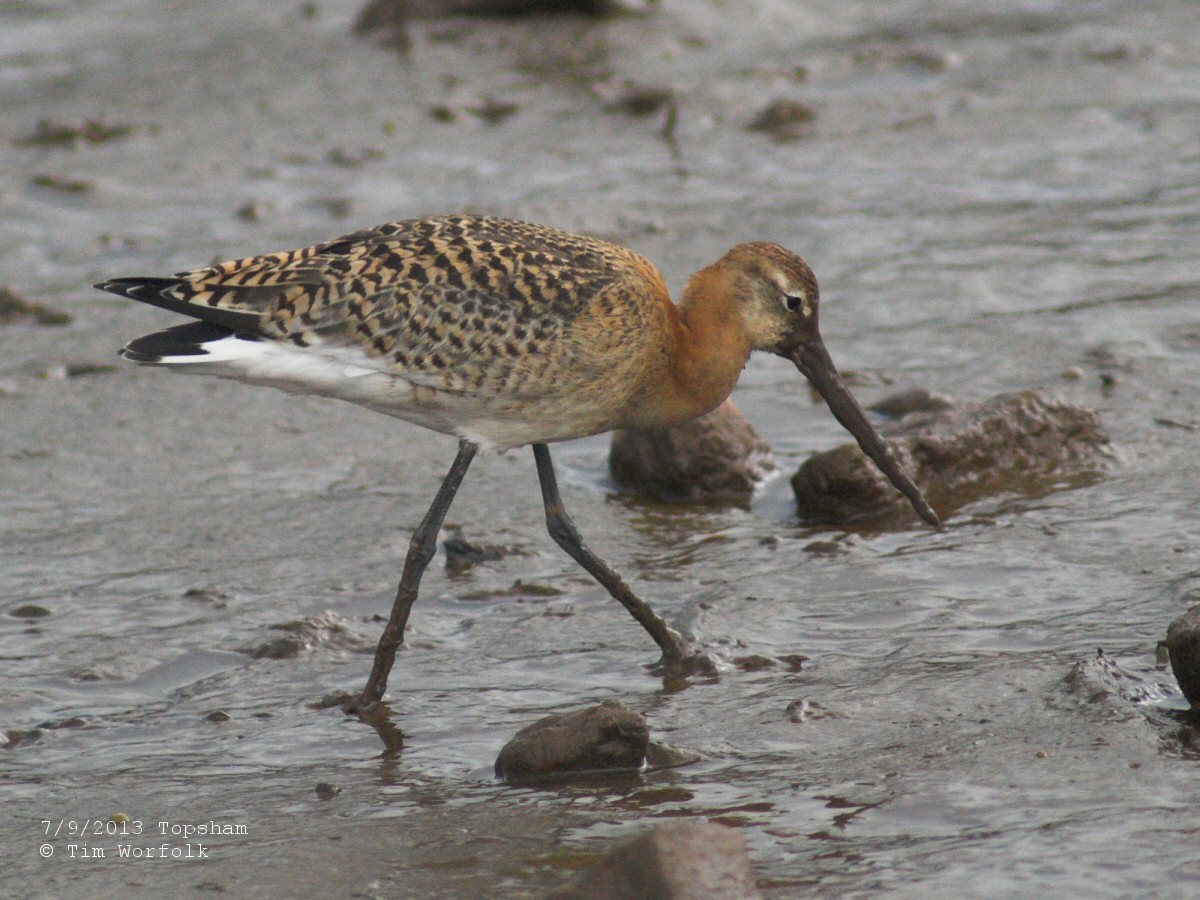 Edit 14/9/2013 - I should have checked a little more thoroughly - or pay more attention to common birds; the boldly barred juvenile Black-tailed Godwit is apparently not unusual in the race islandica which, of course, is the usual subspecies on the Exe.


No identification issues here, in spite of the atrocious photo. I was surprised to see a good sized flock of Dunlin, not common this high up the river. I knew there were a few Curlew Sandpipers in the area and, sure enough, here are two of them with their white rumps gleaming as the flock took off. No prizes for picking them out but if you can spot a Little Stint - a patch tick - in there I'd be delighted, I couldn't.


Finally a nice pair of Cormorants, both apparently second year birds, and both showing the only 'safe' identification character of the form sinensis. 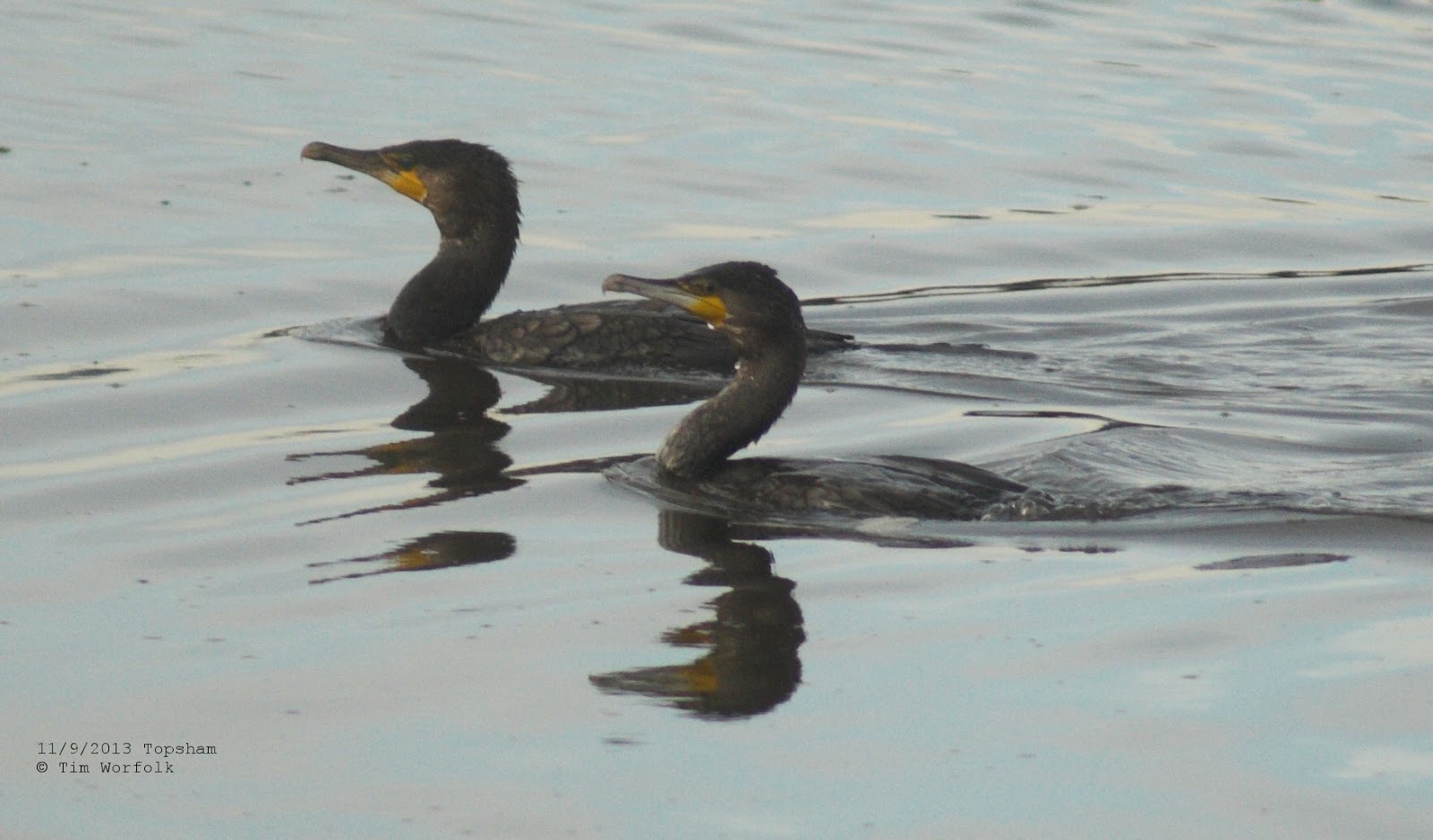 This is one of the few opportunities for birding with a protractor, as all birders with a nerdy tendency know. The only way to be certain of sinensis is to measure the gular angle (the gular area/pouch is that yellow skin at the base of the bill, the gular angle is the angle formed by the gape line and the rear edge of the gular skin - try to keep awake, there may be a test at the end).
So of course, I cropped and enlarged the photos and measured the angles. The top bird is pretty much exactly perpendicular, the lower not quite but close so I'm pretty confident of these angles. According to Newson et al (2004) the overlap in angles between nominate carbo and sinensis is 66-72°, these both exceed that by some way so must be sinensis. 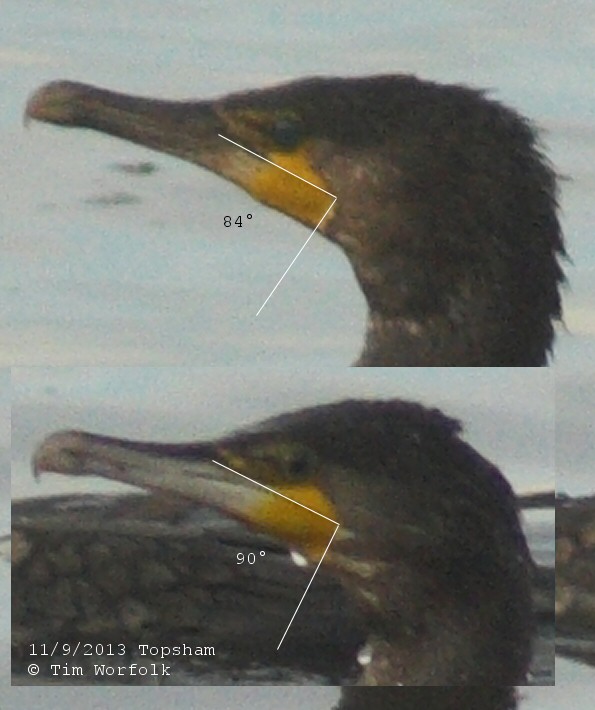 The last Devon Bird Report (2011) contains only a single record of this form. I find them to be fairly frequent on the Exe so I guess nobody else is looking.