One of the few upsides of the cold is the chance to photograph Chiffchaffs, at close range and near ground level. I know it's a sign that they are having serious difficulty finding food but it's too good an opportunity to miss. While standing in the back garden hoping to pick up a distant Waxwing, I got a few lucky shots of this bird. Lucky because it was close, the light was good and I got it more or less in focus - not that usual in my experience of bird photography. Not wanting to let a half-decent photo go to waste, I thought I'd try to age it. 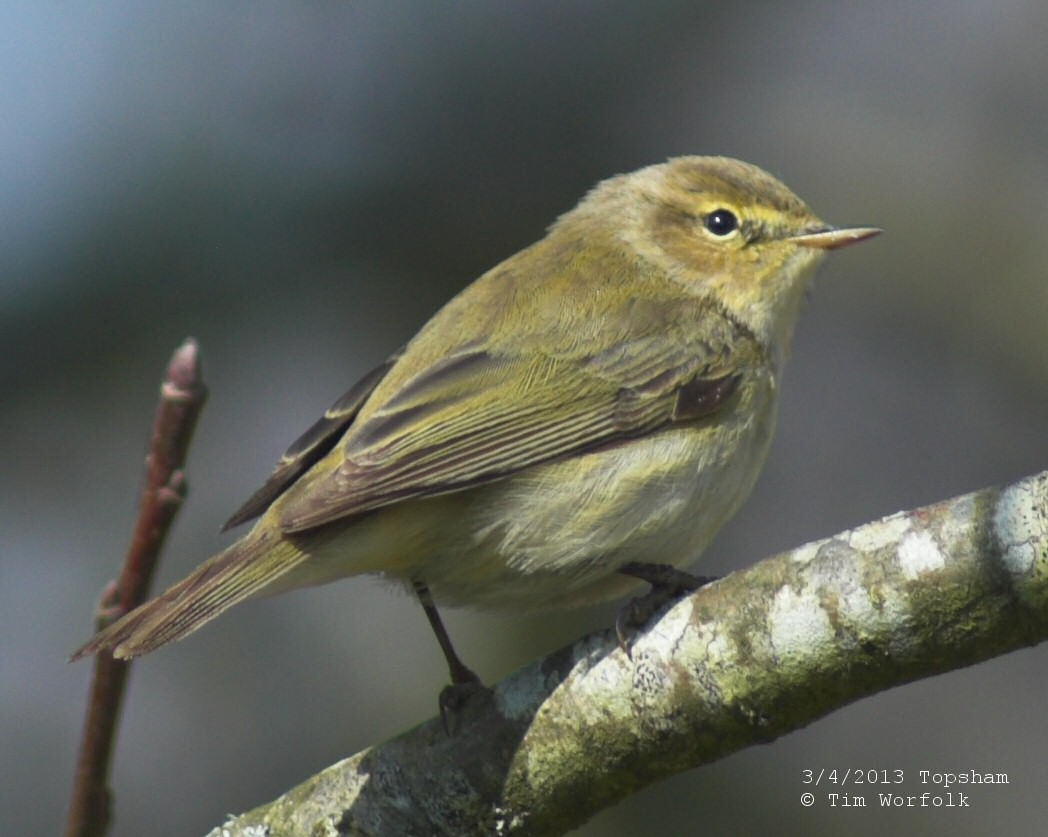 First, I should make it very clear that I am no expert. I'm not a ringer but I do have some experience of handling birds - or rather bird specimens. I have a modest ornithological library, I obviously have access to the internet and I have, to be honest, slightly nerdish tendencies. I like to look things up and I like to apply that to birds I photograph. What I'm really doing is thinking out loud, making notes and interpreting what I can see in the photo based on what I've found out. So when I write that adult Chiffchaffs have a complete post-breeding moult and a partial pre-breeding moult, that's shorthand for "I've just read in Svensson that Chiffchaffs have a complete post-breeding moult...etc." I find this stuff really interesting, I hope others do too.

First, why is it a Chiffchaff and not a Willow Warbler? That's the sort of thing everyone should know but, surprisingly, doesn't seem to be in the National Curriculum. It's a Chiffchaff because it's got dark legs, a short primary projection, an eye-ring more obvious than the weak supercilum, a plain face and four emarginated primaries. If it had called that would have helped, but it didn't - waste of valuable energy, I guess. Incidentally, this last paragraph is not something I had to look up - I have picked a few things up over the years.

Here's a different view of the bird. You can see the short outermost primary (P1), the next (P2) is actually emarginated along its full length but is not counted (?). P3-6 are emarginated towards the tip - I find it helps to think of the indentations. A small digression; in passerines the primaries are conventionally numbered ascendantly - going up on the closed wing the outer is P1; on non-passerines it's descendant - e.g. in gulls the outer primary is P10. There are logical reasons for both systems and I'll follow convention rather than consistency and use whichever is appropriate. 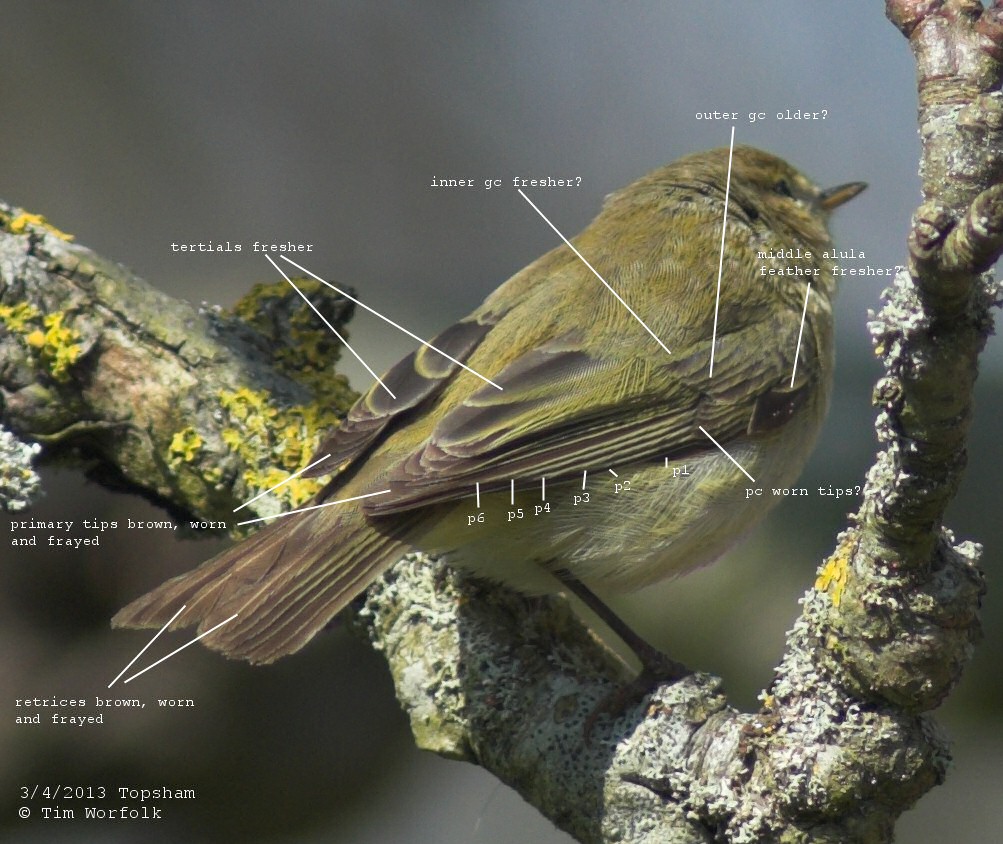 So that's its identity established, what about its age? As ever, the key is moult. Adult Chiffchaffs have a complete post-breeding moult (typically finished by September) and a partial pre-breeding moult (head and body and sometimes tertials and a tail feather or two, usually finished by January). Juveniles have a partial moult in autumn (head/body and tertials, some greater coverts and sometimes the central tail feathers), followed by another partial moult, like the adult, in winter (Cramp 1992). So the key to ageing in spring is going to be the condition of the primaries and the retrices and the presence of moult limits in the greater coverts (Svensson 1992).To even my inexpert eyes, this bird's primaries and tail feathers have seen better days. They are brown (compare them with the fresher tertials) and the tips are frayed. A moult limit in the greater coverts is harder to be sure of but I think the two inner coverts look fresher and more green fringed than the outers. So on the state of the primaries and tail feathers at least this has to be a 2nd calendar year or first summer bird.

Now a different Chiffchaff from the next day. I can't see an obvious moult limit in the greater coverts, the primary coverts look rounded - although the fringes look thin at the tips - and the primaries appear to have reasonably unworn tips. This, I would say, indicates an 3cy or older. However the longest upper tail coverts are very worn as are at least a couple of the tail feathers. At least one tail feather - the slightly (displaced ?) darker one at the top - looks fresh and, by the length of it, is still growing. So, with wing pointing to adult and tail saying first spring, I'm going to pass on this one. 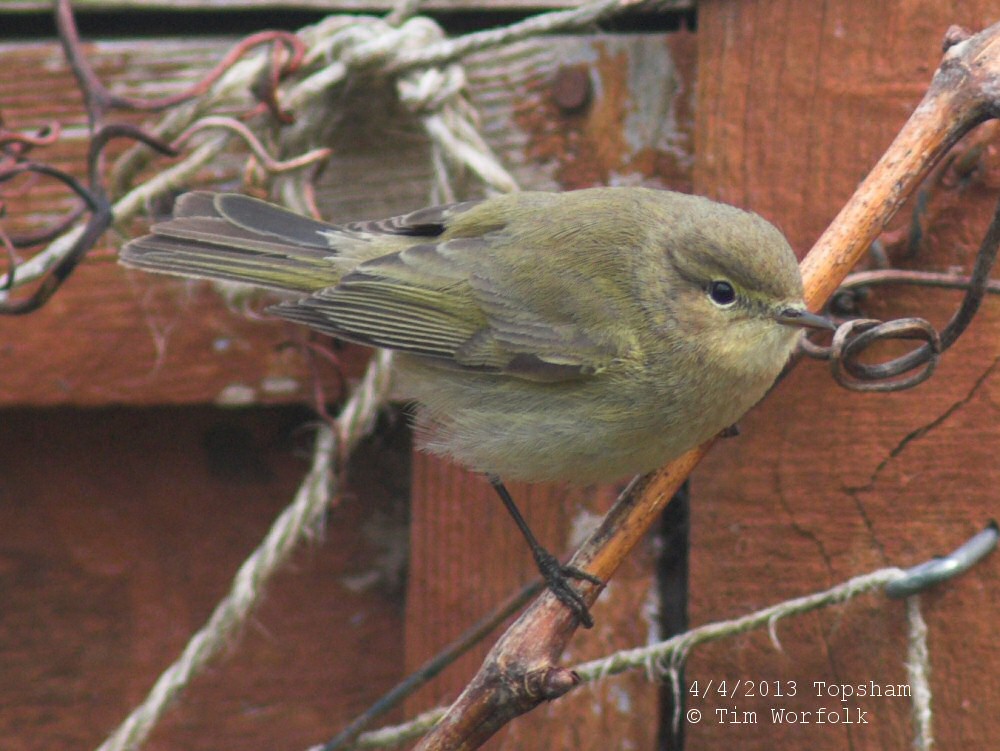 Email ThisBlogThis!Share to TwitterShare to FacebookShare to Pinterest
Labels: Chiffchaff