When I'm out and about in 'birding mode' my approach to photography is simple. I carry a modest lens - just an old Nikon 300mm f/4 with a x1.4 teleconverter - which is a compromise between weight and magnification. I almost never use a tripod for birds - I can usually hand hold at the shutter speeds needed for moving birds. And of course, I scan the middle distance and the sky, not the ground at my feet. Photographing insects is so fundamentally different that, as well as different equipment, I almost need a quite different frame of mind. I suppose It's just like switching a camera's mode option from 'birding' to 'macro'. Except it's more complicated: set to manual focus, minimum aperture, lowest ISO, mirror lock-up and cable release. Of course I also need a different lens - I use a Sigma 180mm f/3.5 macro - and a sturdy tripod and head - a Uni-loc with a Manfrotto Proball 468 RC4; which is one of the reasons I tend to walk slow and not far when looking for insects.

It's been far too long since I did any macrophotography so I wondered if I'd have to learn it all again. Yesterday I dusted off my macro lens and tripod, and tried to remember the techniques. 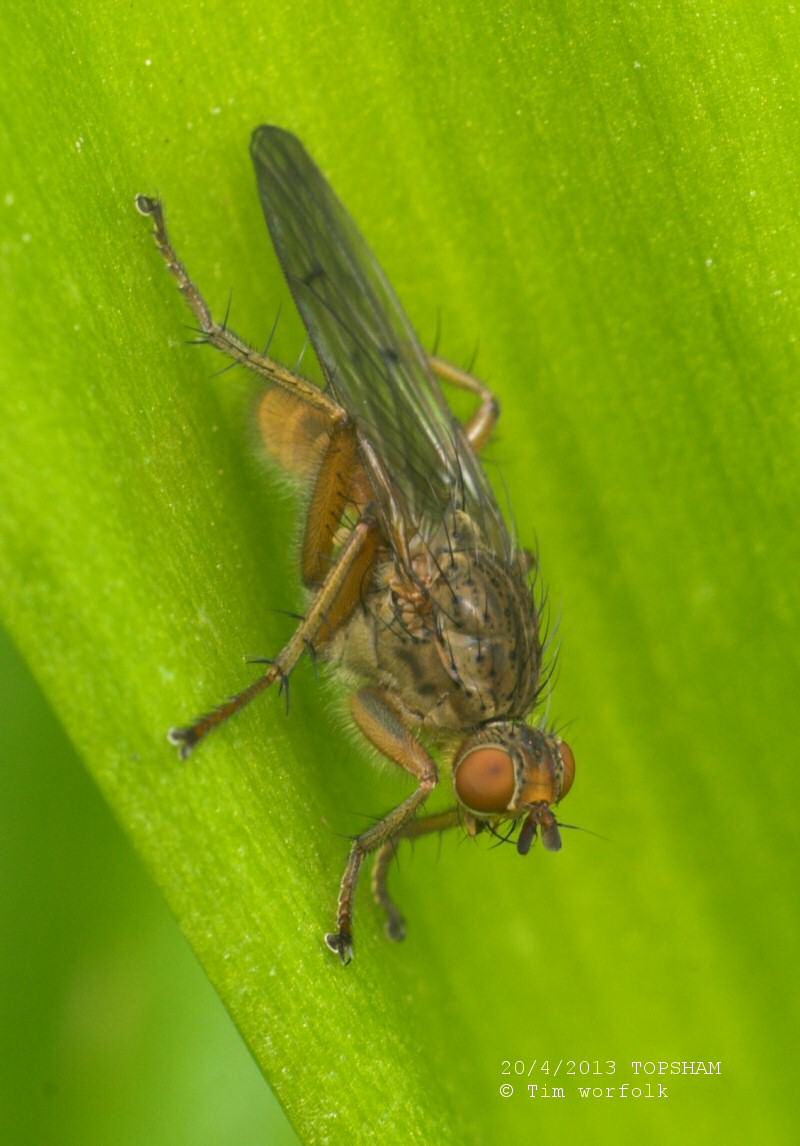 At this point I remembered two of the problems that used to make life difficult: bright sun and wind. Insect cuticles are often shiny - not so much here but think of bluebottles and leaf beetles - and exposing for dazzling highlights gives black shadows and can kill detail. The effect of strong sun on green vegetation is, if anything, even worse. The simplest solution is to shade the subject - a hand often works - but there's a risk the insect will move. The tiniest of air movement can cause leaves to shake but it's rarely continuous and sometimes I just wait for the lull. If that doesn't work then I just look for insects on the ground or on tree trunks.

I spent a little time in the garden re-familiarising myself with the method and found a few things to photograph. This fly was fairly co-operative, it sat still while I positioned the camera and shaded it. I'm not too disappointed with the result; it could be sharper but it is cropped quite a bit. The species looks like Scathophaga furcata (Say, 1832) based on the dark shaded cross-veins on each wing and the dark stripe on the front femur; although I'm not sure it's possible to be certain from this photo. My tentative identification was made using Stuart Ball's provisional key (Ball, 2007).