Adding to my collection of ropey bird photos

I've realised it's been a couple of weeks since my last entry, so much for regular posts. In an attempt not to let things lapse too far, I'll post a few photos from the past few days.

I've been travelling a little further afield recently, covering a few tetrads for the Devon Bird Atlas - mainly mid to north Devon. It's been a great excuse to visit places I'd never otherwise see, some fine countryside that I'd normally drive through on the way to somewhere 'more interesting'. I take my camera of course, and got some shots of birds I hadn't photographed much, if at all, before. Nothing spectacular, and often rather poor photos, but interesting I think. 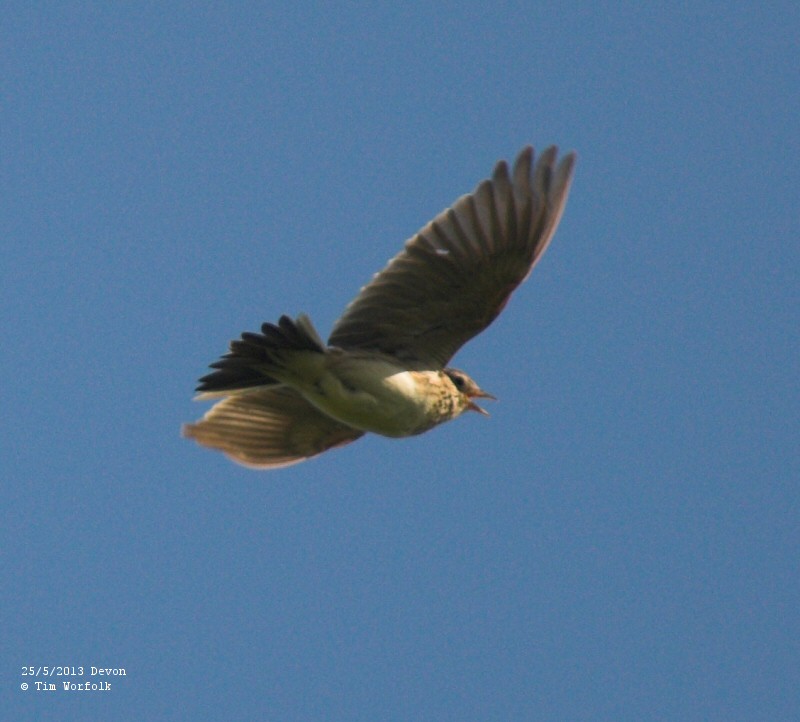 Skylarks were reasonably numerous in the country north of Crediton. I can never resist trying to get decent shots of their song-flight, this could be a lot sharper but at least the bird was low and not a dot in the sky.

I see Stock Doves fairly regularly but rarely close enough to photograph, these juveniles posed nicely and also were proof of successful breeding. 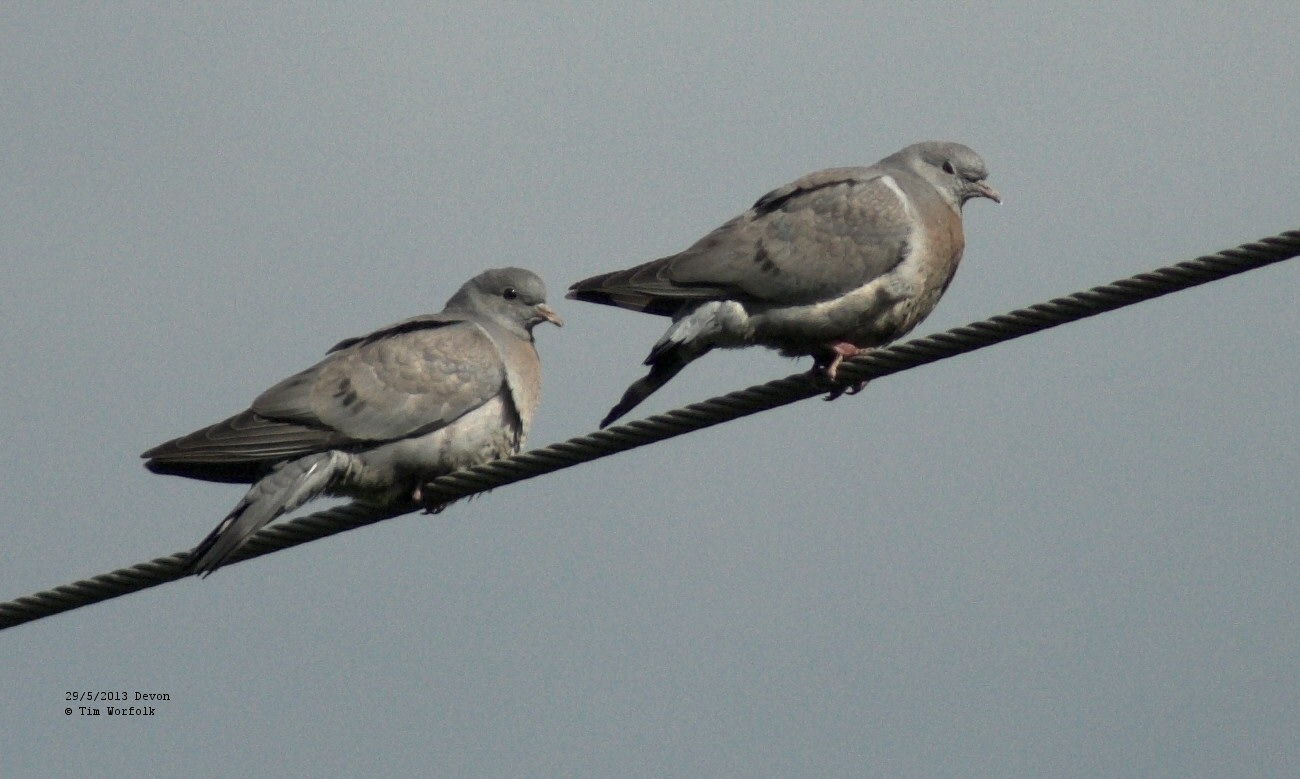 If those photos were average the next are atrocious - but I still thought them worth saving. I found a single Tree Pipit singing from, and above, a scrubby field by a main road. Perhaps the less said the better about the quality but at least the photos show the short curved hind claw and, just about visible, the contrast between the bold breast streaks and the apparently plain flanks.

On the subject of flight identification of Tree Pipits, here's a 'better' one from a few days earlier in Surrey. On this bird the primary pattern can be 'read' - the fifth primary (counting ascendantly, or outside in) is considerably shorter than the fourth (they're much the same length in Meadow Pipit). In case you're wondering about my arithmetic, the longest visible primary is actually the second - the first is tiny and hidden by the primary coverts. Of course, another good feature is the very fine streaks on the flanks. 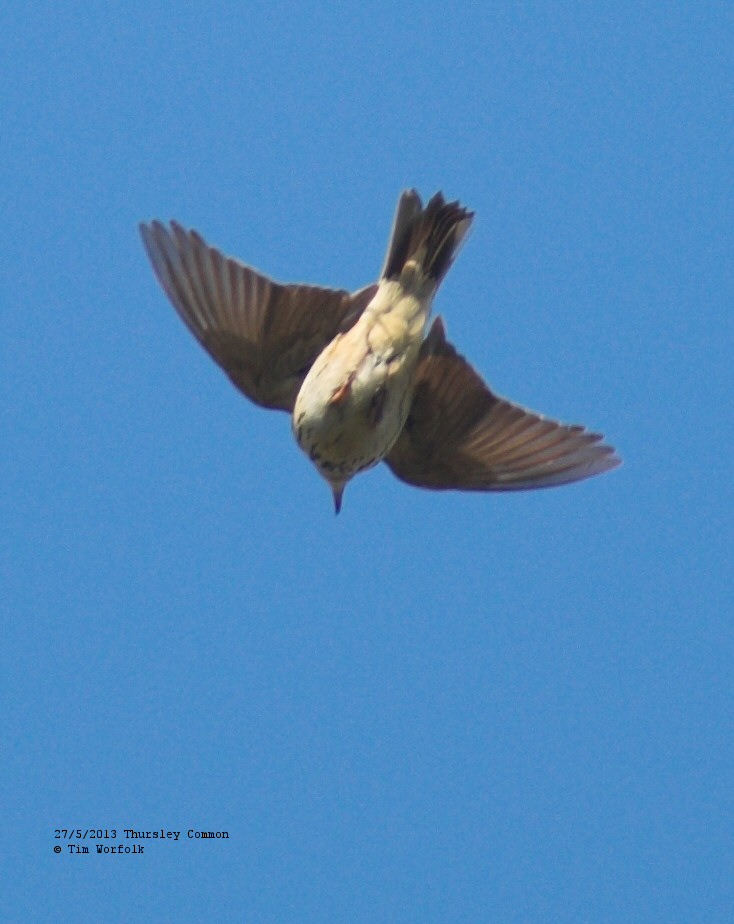 Also from Thursley, here's a Woodlark. Despite them breeding only a few miles from Topsham I rarely get over that way to see them and I don't think I've ever photographed the species before. This one was singing from a wire so the angle was difficult. Still, it was showing some serious looking hind claws. 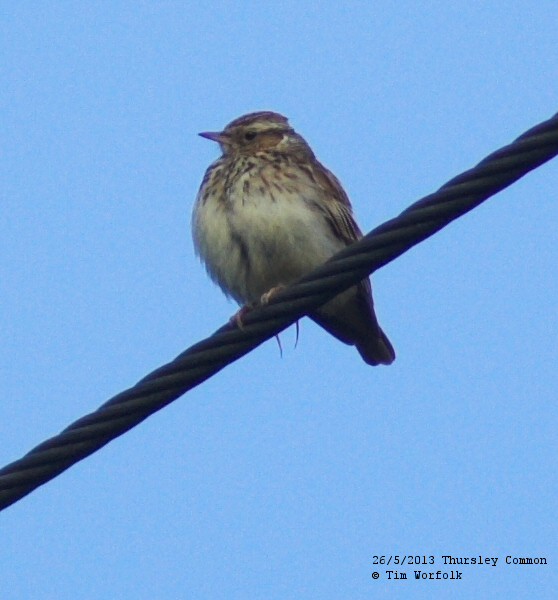 Back in Devon I was working some tetrads near Knowstone in North Devon. I found a few Spotted Flycatchers, this is my 'best' shot, about the only one where the head wasn't hidden behind a branch - I'm sure they do it deliberately. 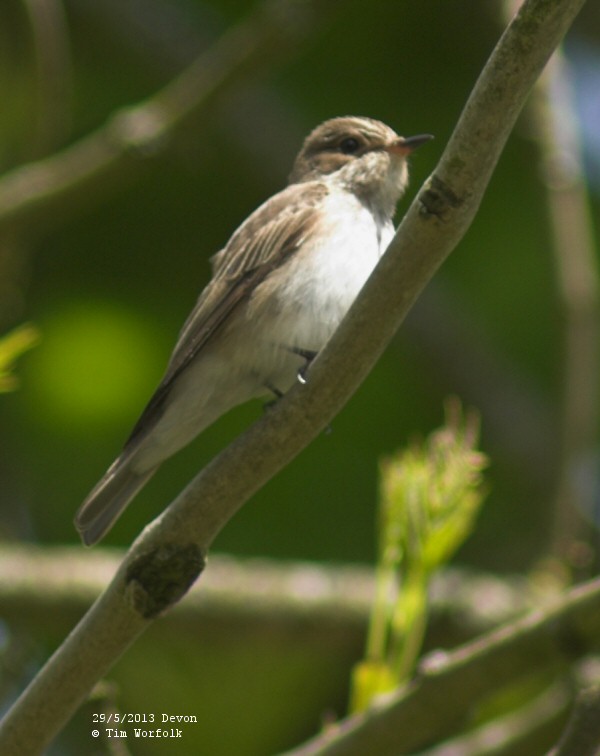