Just finished another plate for the 'Tubenose Handbook' - a few corrections and alterations still to be made of course courtesy of the exacting Mr Shirihai. Here's part of it, Sooty (Ardenna* griseus) and Short-tailed Shearwaters (A.tenuirostris). 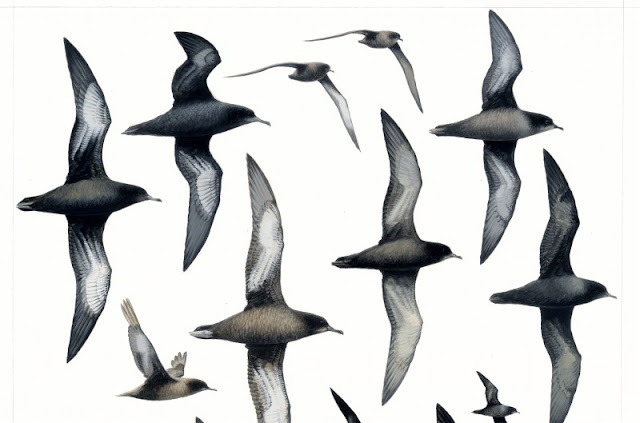 Short-tailed Shearwater: the English name must be one of the least appropriate of all tubenoses, it doesn't look particularly short in the tail and measurements suggest that it's actually longer-tailed relative to wing and body length than Sooty. Mind you, I'm really not sure there's an obvious alternative other than 'slender-billed' or even 'small-billed shearwater', but at least these have the advantage of some relationship to the scientific name.

Sooty Shearwater of course occurs annually in huge numbers in the North Atlantic but Short-tailed, an equally numerous transequatorial migrant in the Pacific, has never been proven in European waters. I presume all our Sooties come from South American and Falkands colonies but, since Short-tailed only breeds in Southern Australia and Tasmania, it's occurence in the Atlantic would be exceptional. In fact there are just three records: a sight record off Virginia January 1998 (Brinkley et al. 2001), a moribund bird in the Gulf of Mexico off Florida in July 2000 (Kratter & Steadman 2003) and a newly dead beached specimen in Bahia, Brazil in May 2005 (Souto et al. 2008). So Short-tailed Shearwater must be a distinct possibility off British and Irish coasts (I understand there have indeed been plausible claims from respected seawatchers). Seeing one well enough to be certain would obviously be difficult while getting it accepted another thing entirely; quality boat-based photos might do it?

*Ardenna - recent genetic studies suggest that the larger shearwaters comprise a monophyletic group distinct from the smaller Puffinus spp. (and in fact Puffinus appears to be more closely related to Calonectris).
Posted by Tim Worfolk at 08:59