Most of my birding currently seems to involve staring at gulls on the Exe at Topsham. June can be a desperate time for gull watching, the wintering birds have gone, spring migration is over and the fresh juveniles have yet to appear. Still, there's plenty of gulls to look through at least. The local Herring Gulls are all well into their complete moult, the first and second summer birds often looking shockingly worn with pointy brown primaries and whole rows of coverts dropped. There's some variety in that they can all look so different - and often nothing like those nice, neat field guide illustrations.  Mid Summer is also when Yellow-legged Gulls should start to show up. What I seem to be getting though is 'not quite michahellis' - birds that at first glance look OK but on closer inspection just look wrong. I've seen three different birds at Topsham Rec in the last week, all looked promising at first but ultimately failed to satisfy.

Here's the first - 24th June; darker mantle than Herring Gull, yellowish legs, a lot of black on the outer primaries with a small mirror on P9. 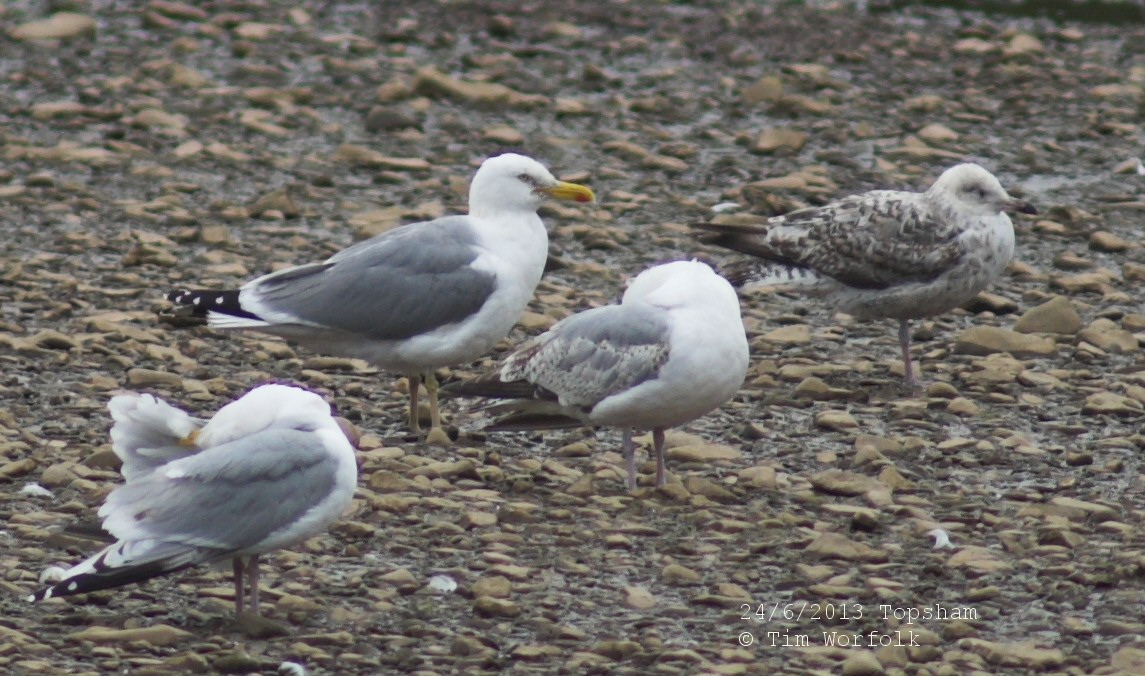 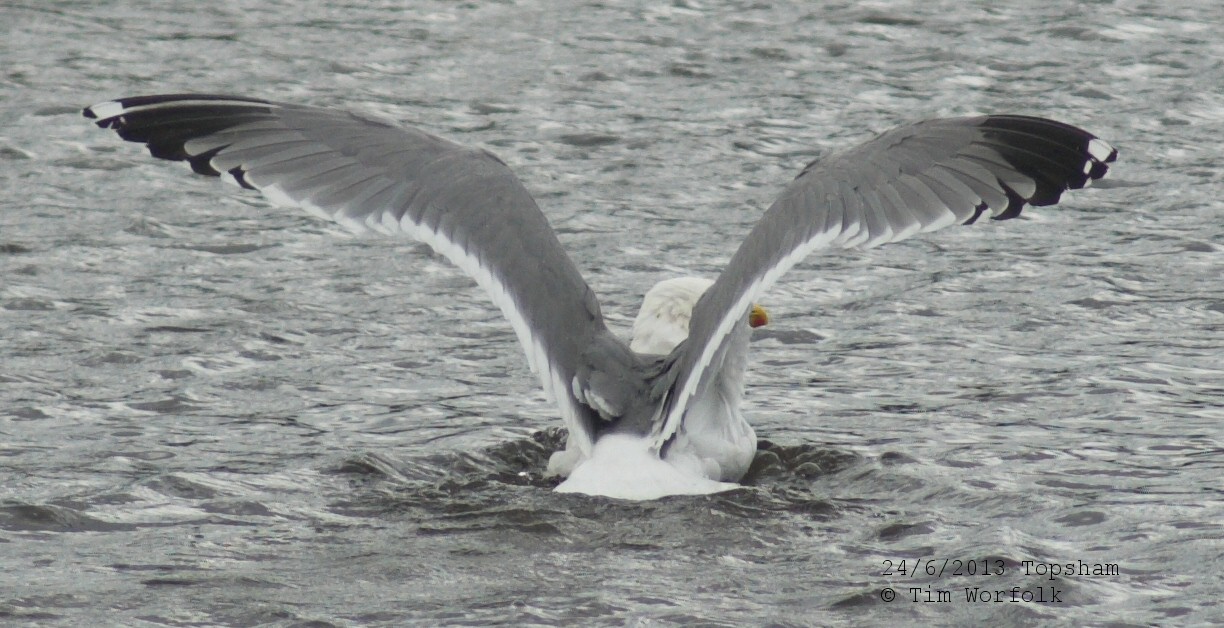 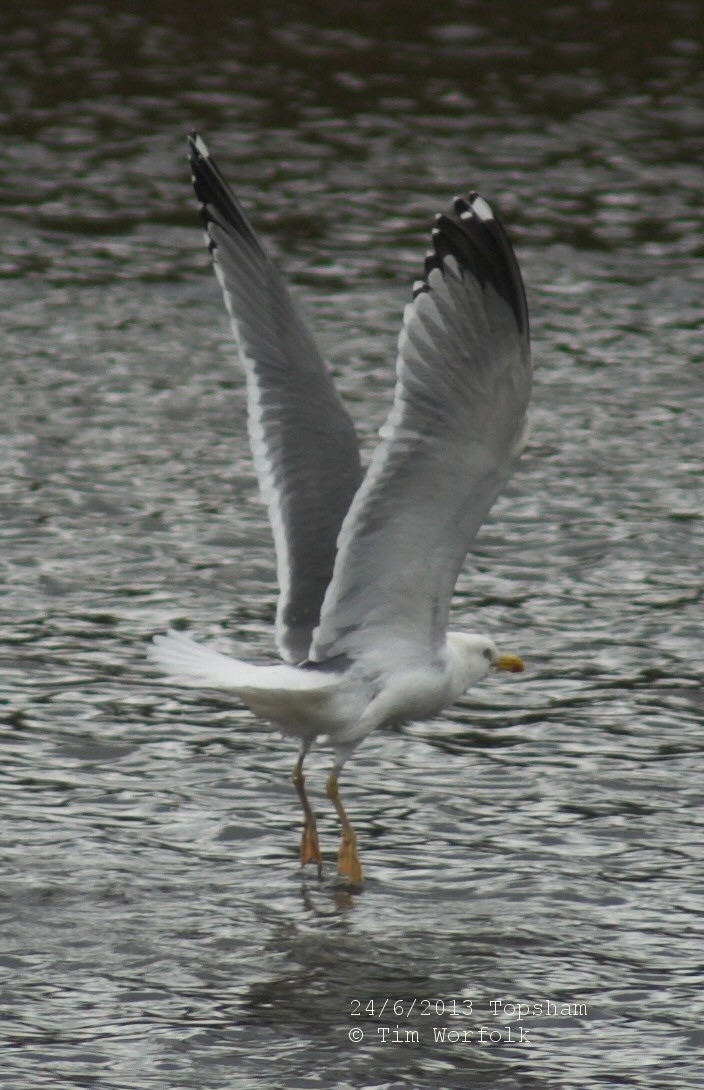 Here's number two - 26th June; as before, darker mantle than Herring Gull, yellowish legs, much black on the outer primaries with a small mirror on P9. 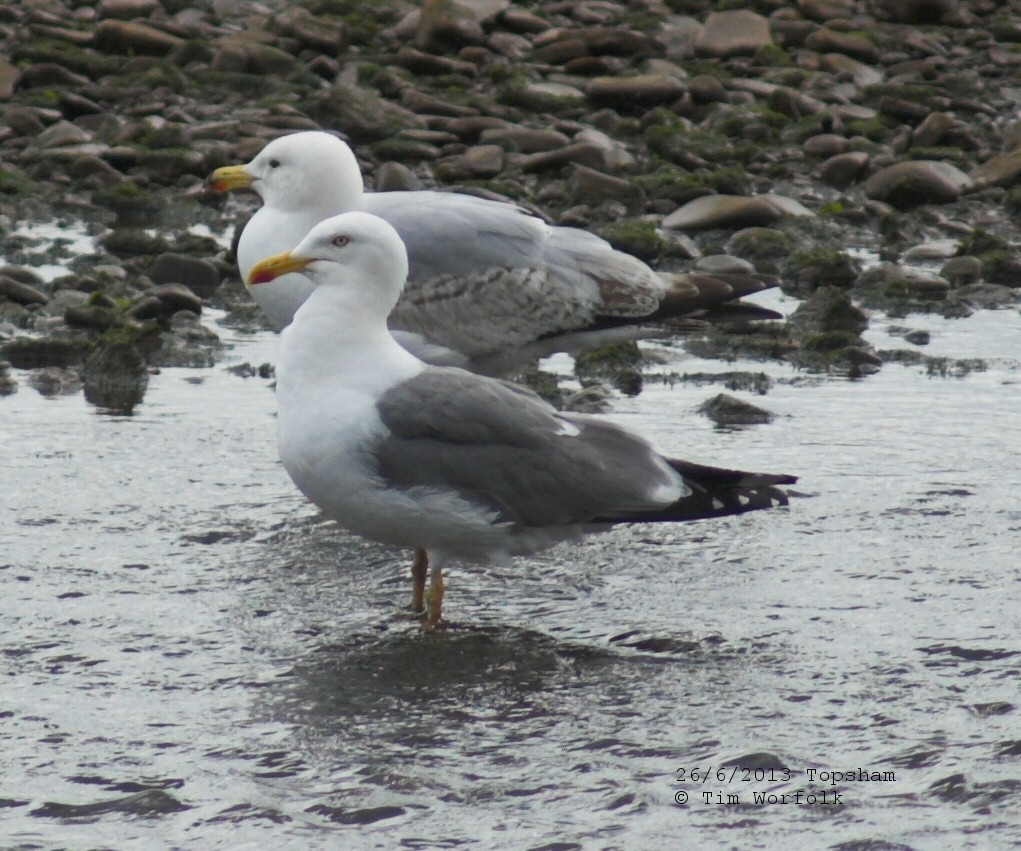 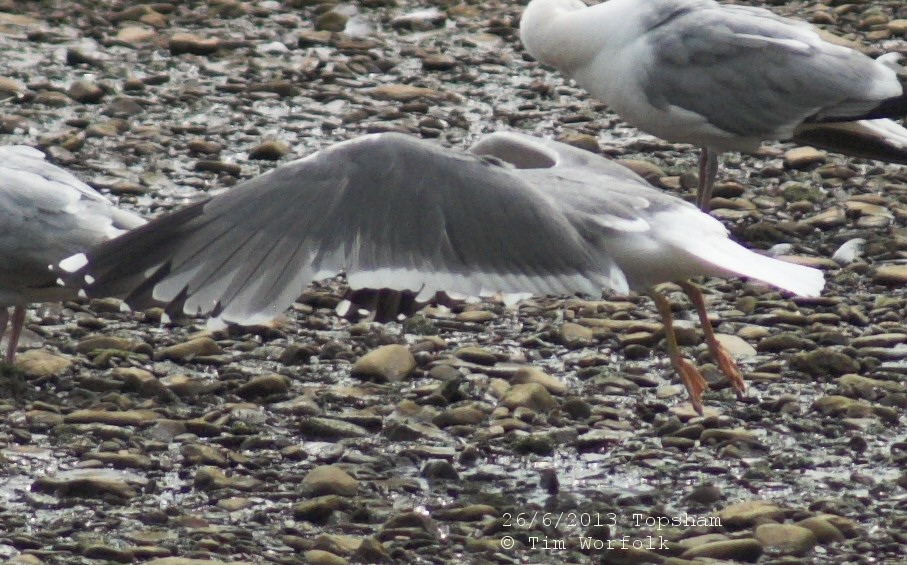 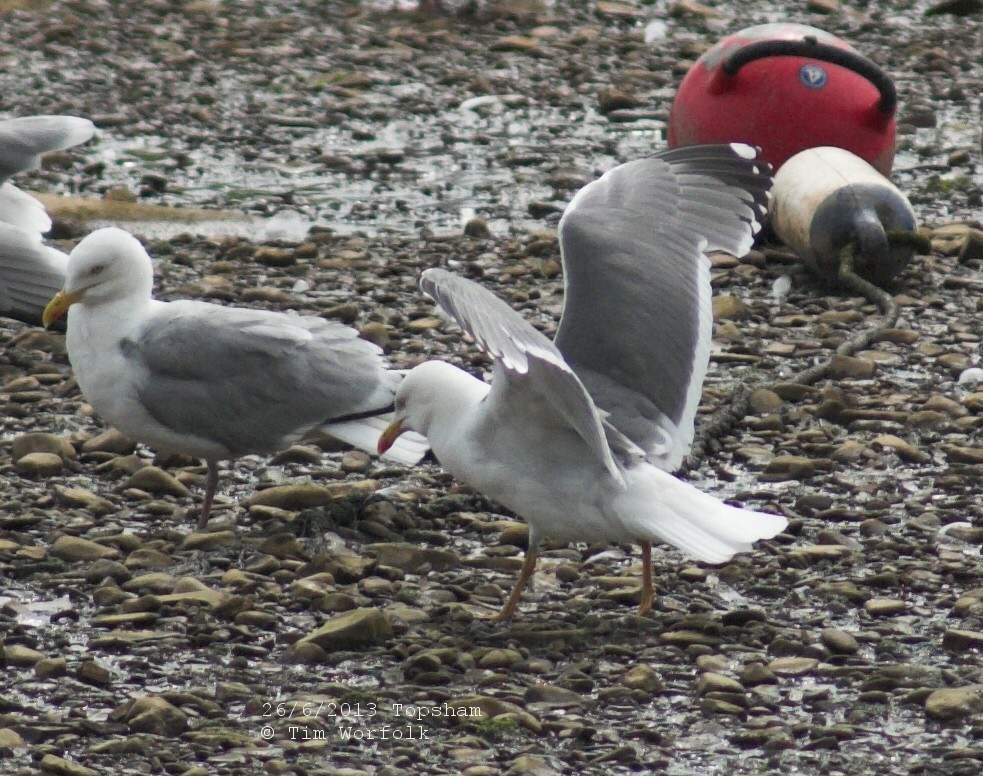 Now here's number three - 28th June; again a darker mantle than Herring Gull, yellowish legs, much black on outer primaries but with no mirror on P9. 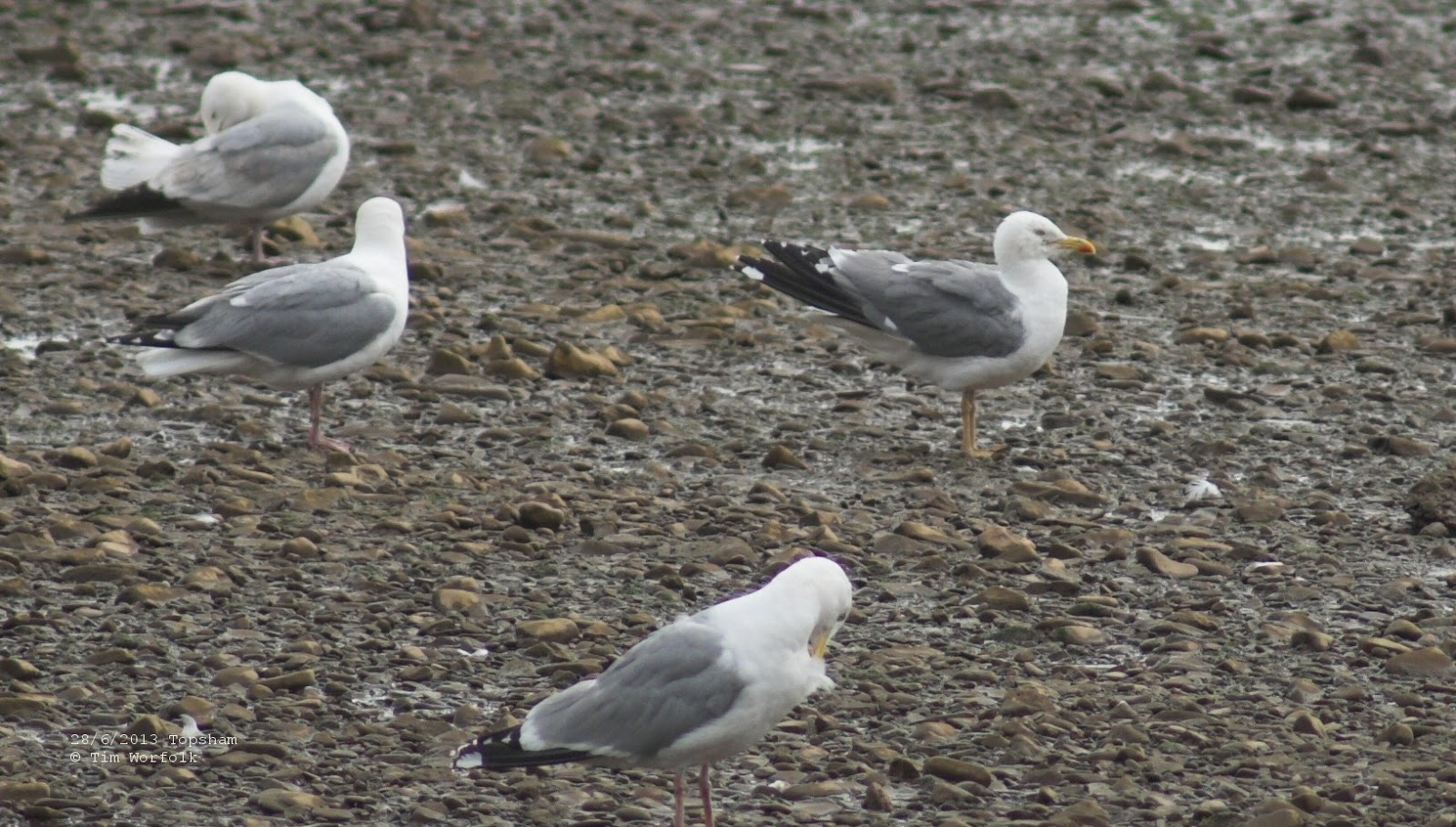 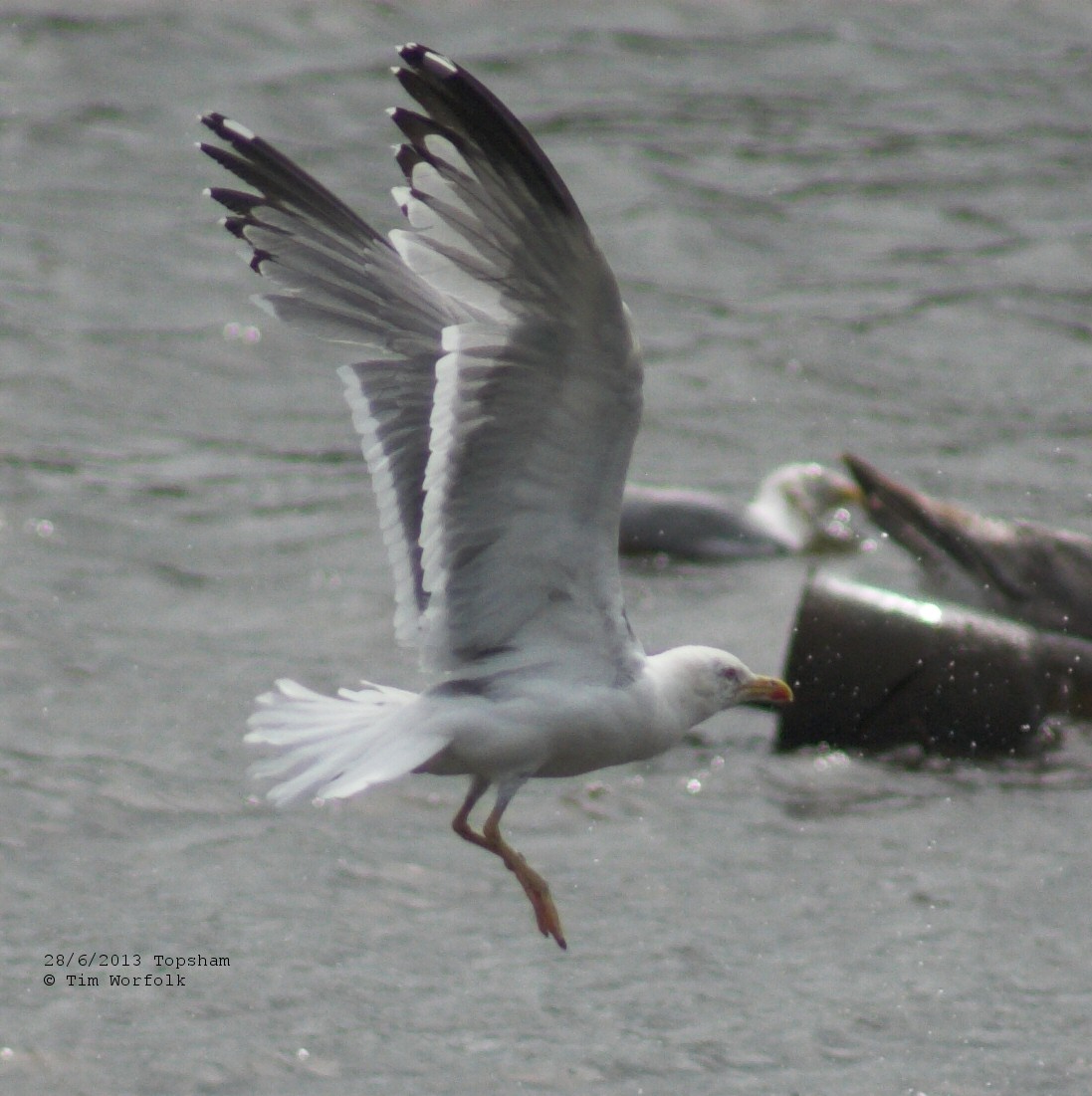 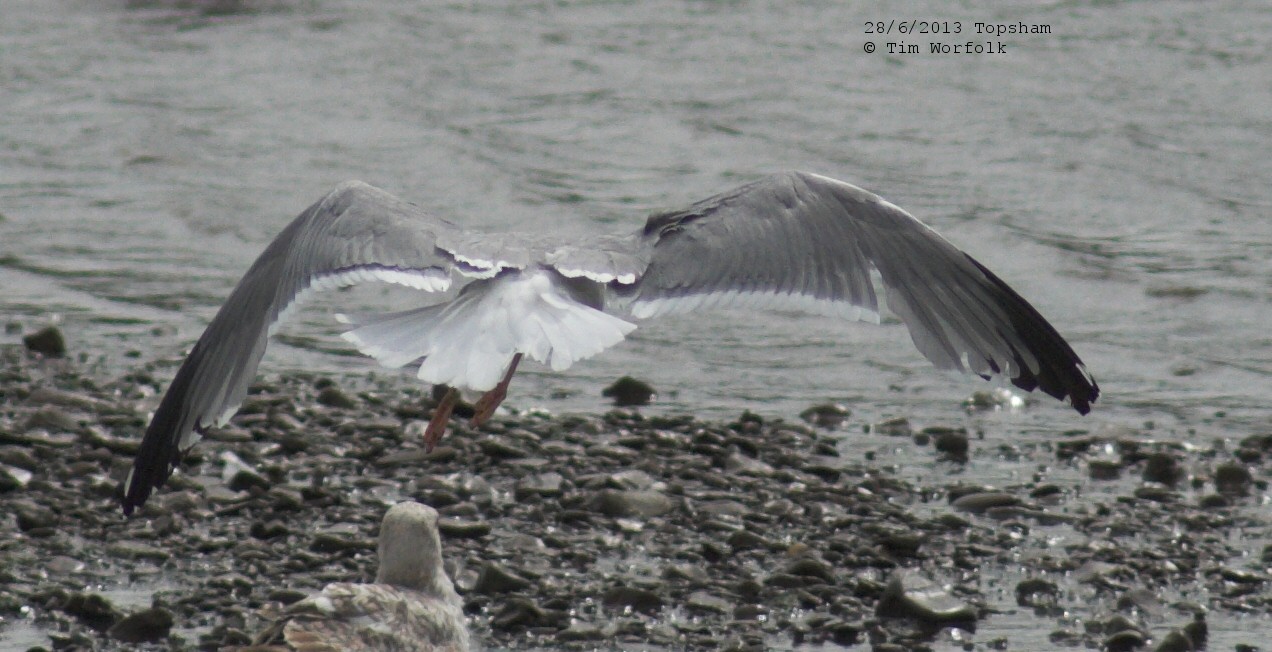 All three birds stood out as clearly different from the nearby Herring Gulls, most obviously in their darker mantle, but also leg colour and primary pattern. So why aren't they Yellow-legged Gulls? Several things appear odd:

Mantle shade - darker than argenteus alongside, but probably not actually dark enough for typical michahellis; also #1 and #2 at times looked a little too blueish grey.

Leg and foot colour - certainly yellowish from some angles, though often, when viewed from behind, appeared quite pink. Typical June michahellis should have bright deep yellow legs and feet.

Primary pattern - The broken black band on P5 of #2 and #3 are, while not impossible in michahellis, are rare. Also the whitish 'moons' behind the black on P5-7 on all three are atypical of michahellis.

Orbital ring and gape - difficult to see clearly but don't appear to be dark, they both should be red in breeding michahellis.

Size and structure - compared to most nearby Herring Gulls, all three birds looked small, with unimpressive heads and bills. This is admittedly an area of much overlap and they could just be small females but their size and shape certainly doesn't favour michahellis.

Most of these features are possible in 'proper' michahellis - with the possible exception of the orbital ring and gape which is very hard to determine from these photos. But, taken as a whole, I'm forced to the conclusion that all three birds are probably hybrids of some sort. It's hard to say what the parents are - although Herring Gull is certainly involved - and, of course, they don't have to be first generation crosses.

I've now seen seven different apparent hybrids at this site in the last 8 months and, while one or two were clearly not yellow-legged, I wonder how many of the others I'd have called michahellis on a cursory glance? I notice that Yellow-legged Gull has now been 'downgraded' to a category B species by the Devon Rarities Committee, i.e. only brief notes required. I wonder if this is wise?

Postscript: at the same time as the second bird on the 26th June I got brief views of a better candidate michahellis - it dropped in briefly showing darker grey mantle and an apparently dark orbital, briefly head-scratched showing nice yellow feet before disappearing when I was distracted - so no flight shots. It's not an adult - the grey-tipped blackish primary coverts just showing combined with the white mirror on an old P10 indicate a 4th calendar year bird. There's a lot of black on the just moulted P5 - just beneath the tip of the longest tertial - and also some black on P4. I would have preferred a nice spread wing shot but I'm happy to call this a michahellis. 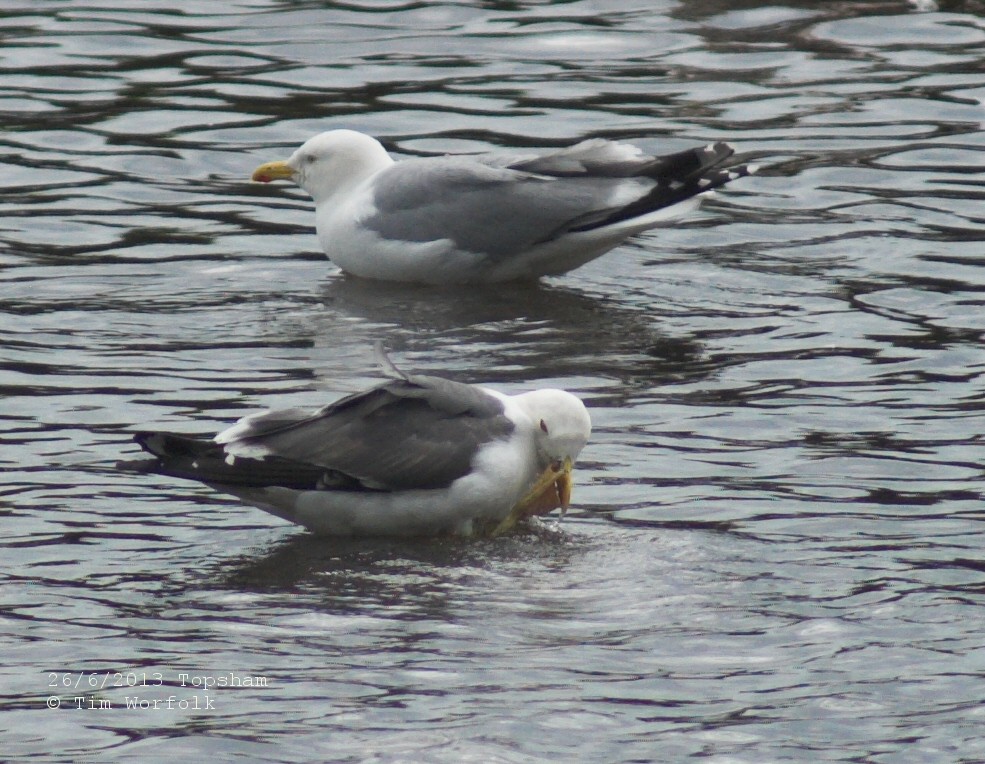 Finally, many thanks to my good friend Martin Elliott who, unlike me, really knows a lot about gulls, for his invaluable, patient and expert input with these birds.