The days are long and so are the gaps between posts. I could make excuses about pressures of work but the truth is I've been taking a bit of a break. There doesn't seem to be much happening bird-wise locally (maybe I'm not looking hard enough) so I find my attention wandering. As a five minute break from my desk, I like to take a walk down the garden with my macro lens/tripod set-up. There's nearly always something of interest. So, at the risk of disappointing those expecting photos of gulls, sketches of birds or even an update on my Tubenose work, here are some more insect photos. All taken in my back garden in the last few days - the technical details (if anyone's interested) are: Nikon D200, Sigma 180mm macro, Uniloc tripod and Manfrotto ball head, no flash, just long exposure, mirror lock-up, cable release and wait for the wind to drop.

First here's a bug, Deraeocoris ruber, family Miridae. I've photographed this species a few times and it varies a lot in colour; this is a paler individual, some are quite blackish - mostly males according to Southwood & Leston (1959). Both adults and young are predators of aphids and other small insects. 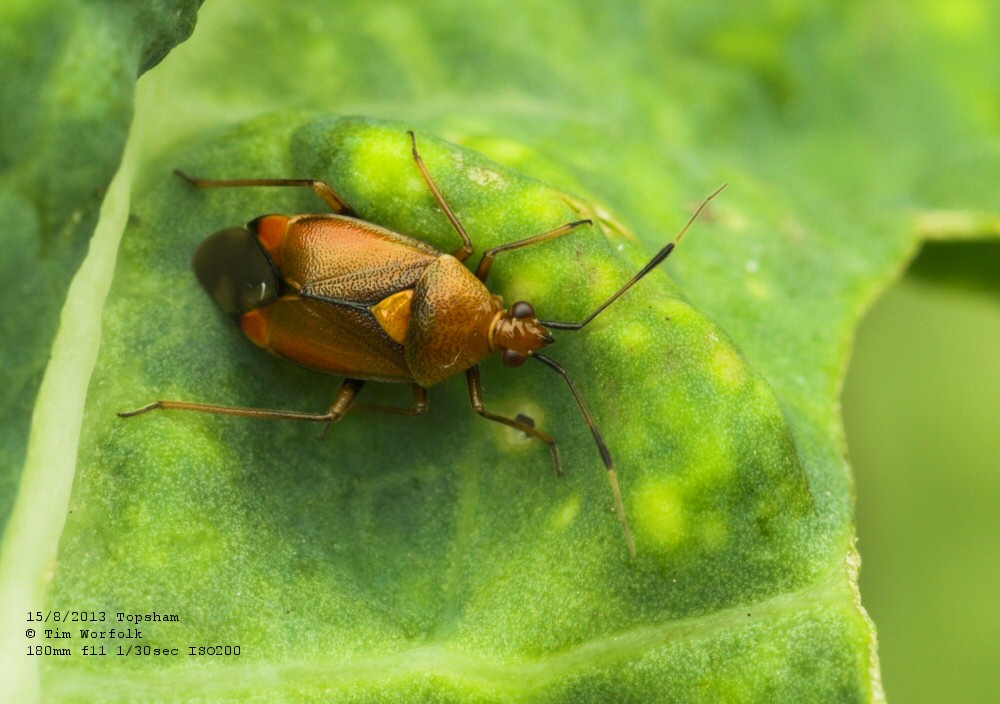 The next two shots show a Hoverfly, a Eumerus sp. There are four British species (Stubbs and Falk, 2002; Ball and Morris, 2013); it's not E.sabulonum as that has a reddish base to the abdomen, also I think E.ornatus can be ruled out as the ocellar triangle is not far forward enough. This leaves E.funeralis, which has a distinct bare patch on the underside of the hind femur, and E.strigatus, which doesn't. I suspect this is strigatus but can't be certain with these views. 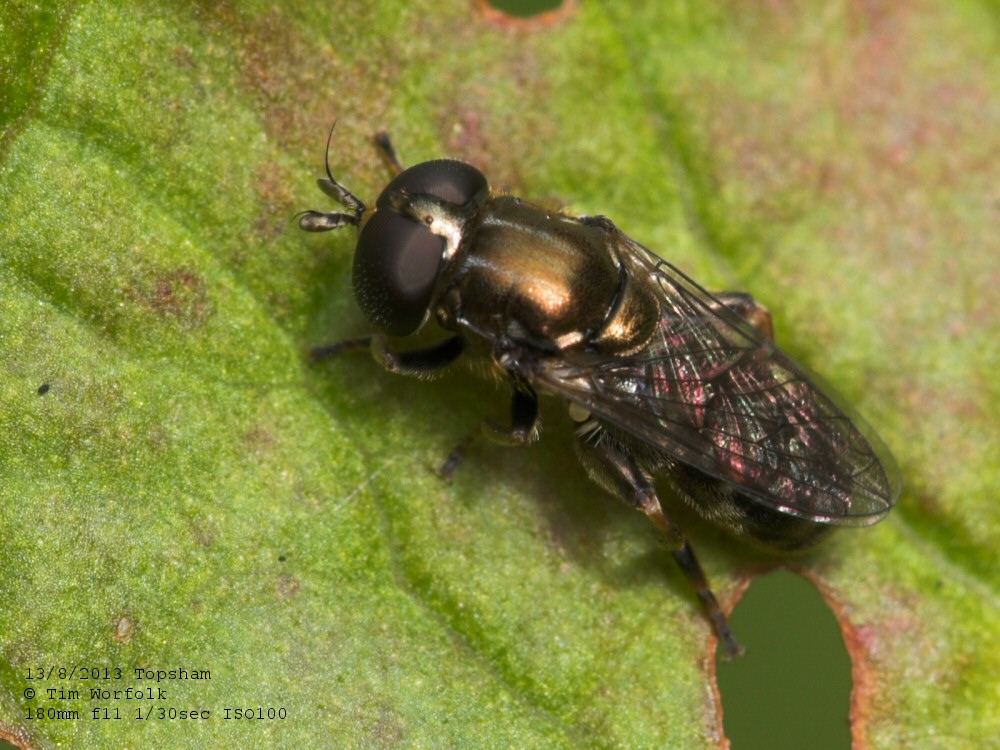 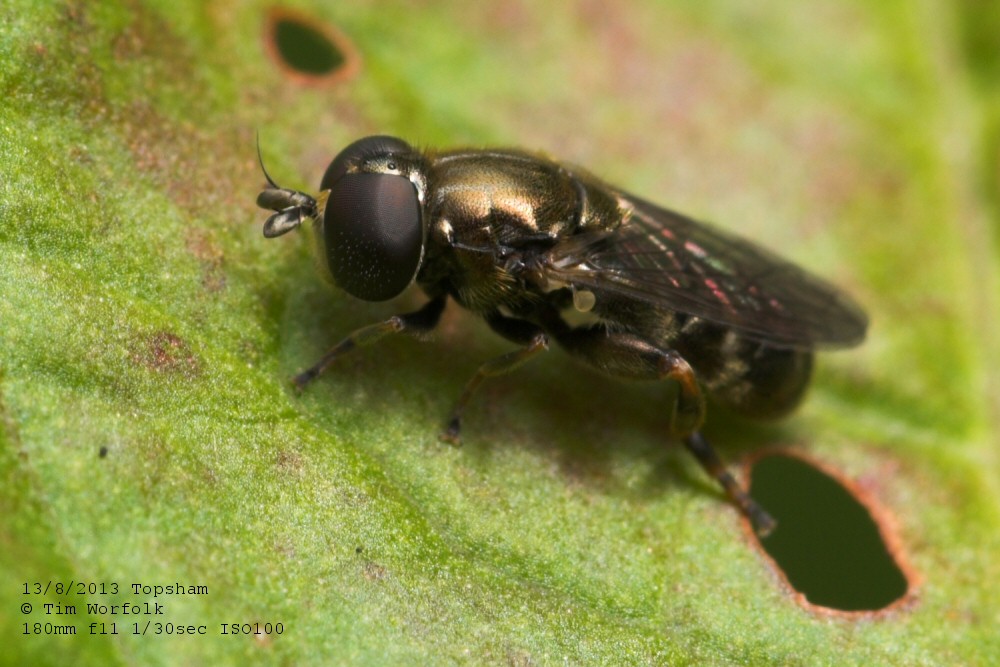 Now for some flies with somewhat less savoury lifestyles, Tachinids, all identified, with varying degrees of confidence using Belshaw (1993) and Tschorsnig and Herting (1994). First we have Voria ruralis, I see this in some numbers locally in late summer - when I look. It parasitises moth larvae, mostly Plusiinae - Silver Y, Burnished Brass and Dark Spectacle are mentioned. 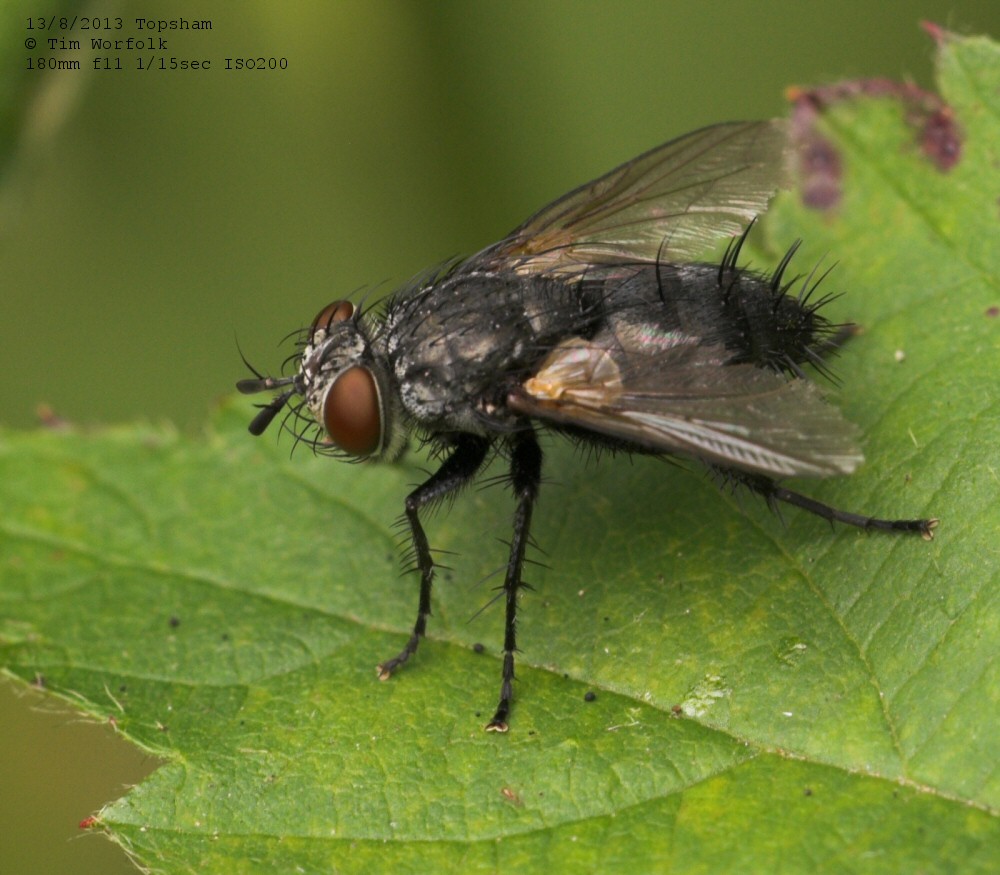 The next two photos show another fairly common Tachinid,  Eriothrix rufomaculata. The reddish patches on the sides of the abdomen (just visible through the wing) are typical, though not diagnostic, this was keyed using Belshaw (1993). This also appears to parasitise moth larvae, although it's usual host is surprisingly unknown given that it's so common. 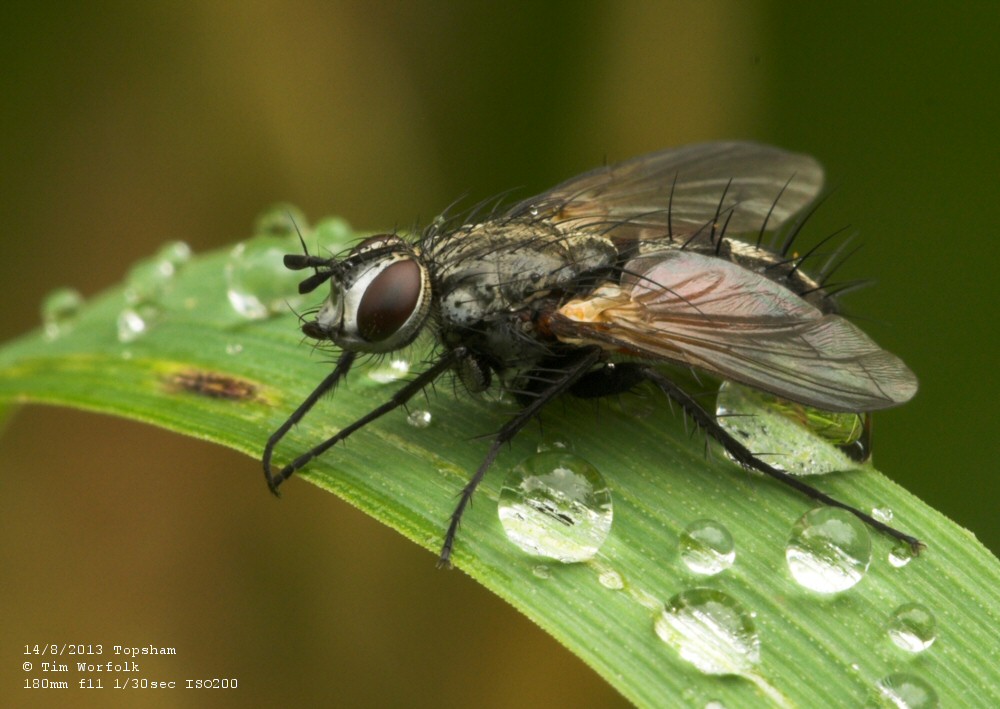 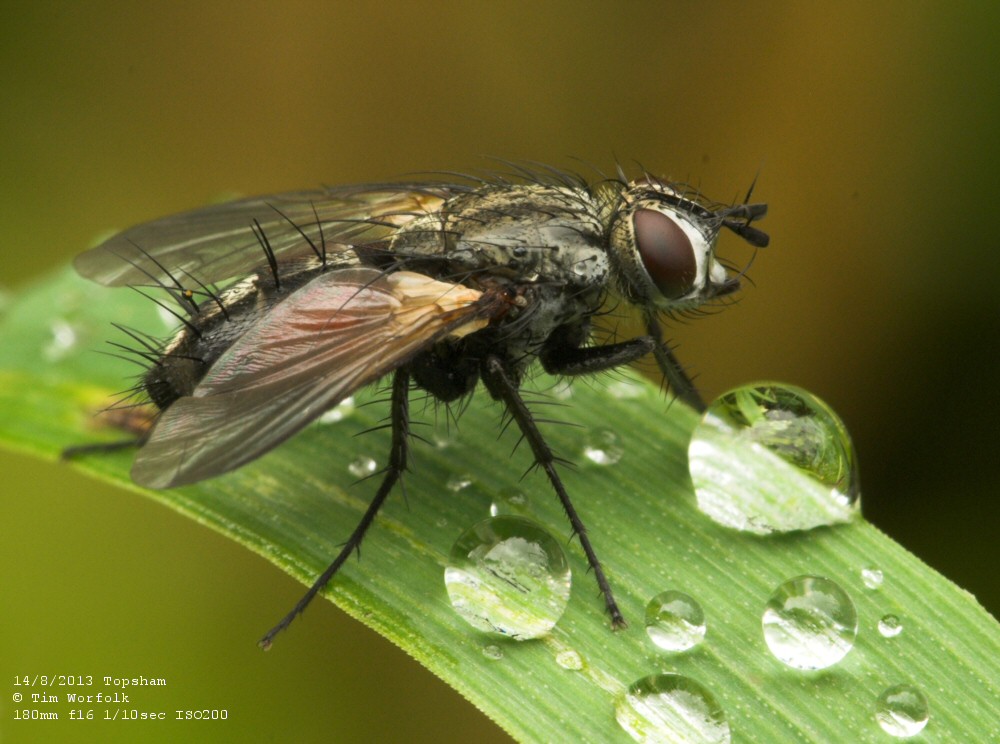 This last fly is a new one for me, using Belshaw it keyed out as Gastrolepta anthracina, I checked reliably identified photos (e.g. Diptera.info) and, a little surprisingly, they seem to match. I'll put it down as a probable and check with those who know. This doesn't seem to be a common species - though it's hard to tell with such an under recorded group - and mainly found in coastal southern England; the host species appear to be beetles. 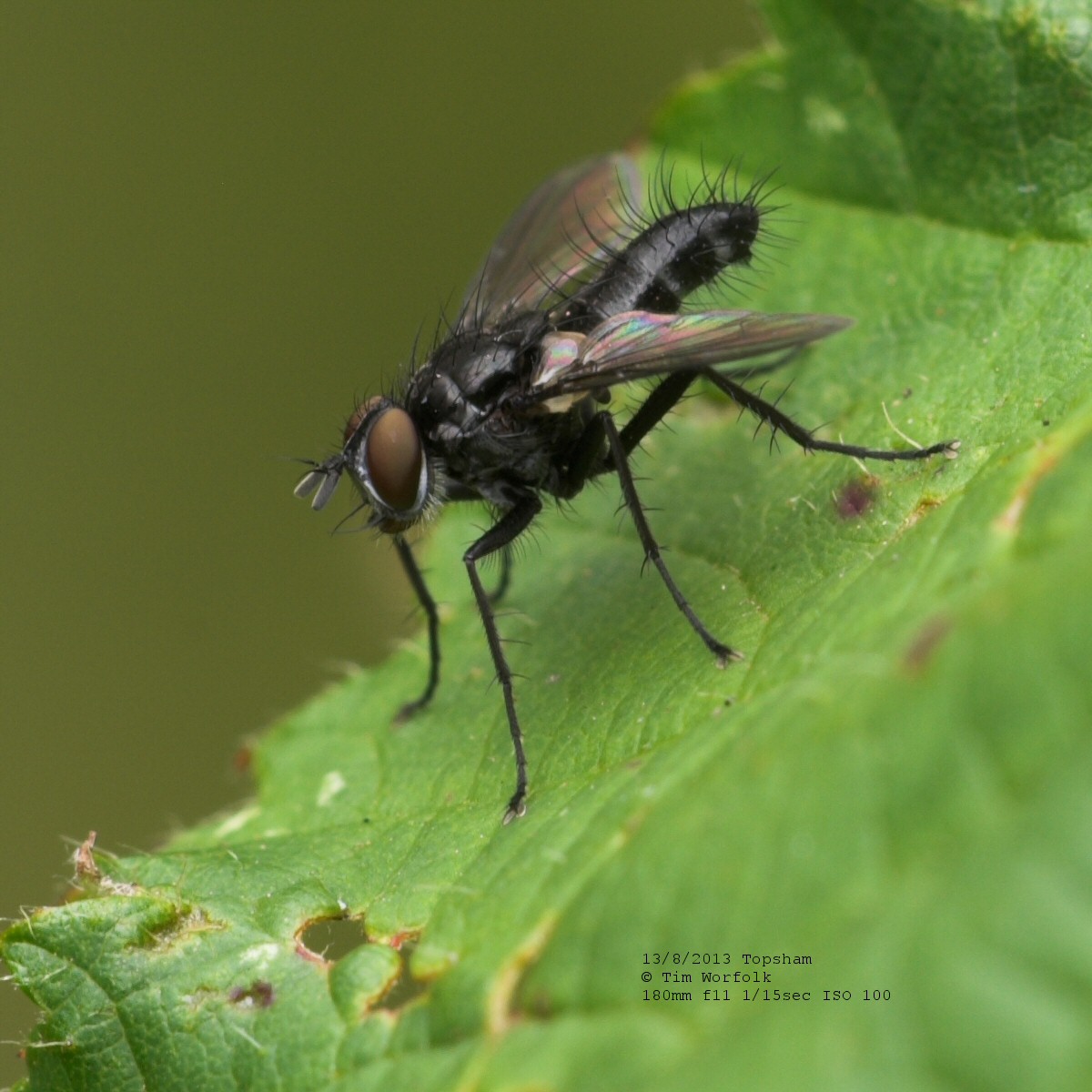